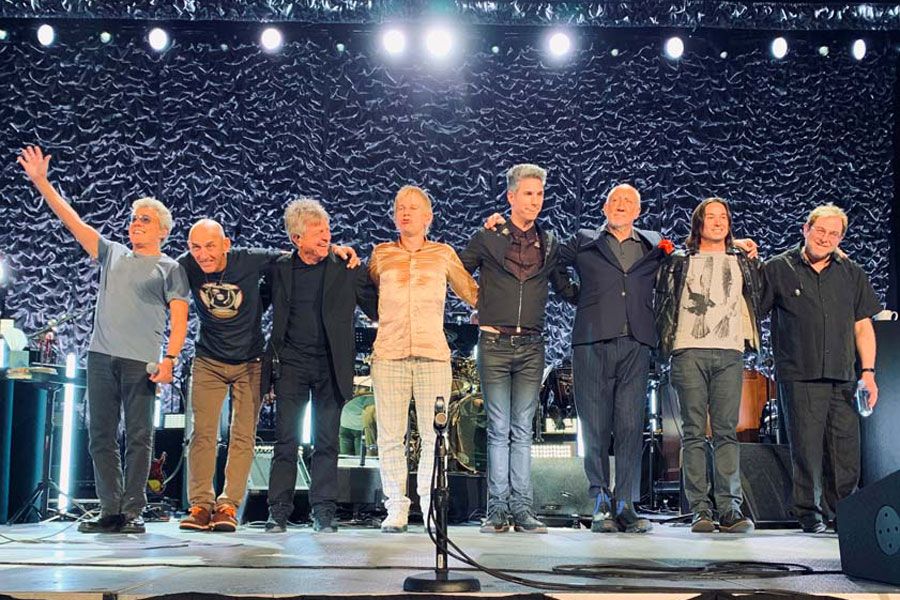 The first show on The Who's Moving On featured a full orchestra for all but 4 songs. Overall, it was a wonderful show with a few rough spots, mostly technical, but to be expected on such a change from the routine show that they have been touring since 2014.

The first thing you notice is that the stage is crowded. And there is no screen on stage, just a large screen on each side of the stage.
Roger and Pete sounded great all night. Roger's voice was extraordinarily strong through the entire show. His Love Reign towards the end of the show was superb.

Pete shared more vocals than usual and he really sounded good, not something I usually would say. In the Tommy set he did his standard Acid Queen and then Eminence Front, but also I'm One and Drowned in the Quad set.

Roger was very comfortable all night with the orchestra, especially with the Tommy material. Not surprising as he toured last summer in this format doing the entire rock opera. He was not comfortable with the sound, especially what he was hearing (or not hearing) in his earpieces. His harmonica bits were almost mute - too bad as he is always great on it. This will need to be corrected for future shows as it was really missed.

After the Tommy set (where was my favorite Christmas?), they performed 4 hits with the orchestra, starting with WAY. Roger introduced Imagine a Man as one of his favorite Who songs- not one of mine but nice to hear a different song. I would have preferred How Many Friends.

Eminence Front was great with the orchestra, although the last one of that set, Join Together, was overwhelming and seemed to last a very long time.

After Join Together, Pete went into one of his mini tirades about how the sound was just a bit much on that one and how great his original back up tape that he did by himself in his studio with lots of instruments and vocals sounded better. He turned to Roger and told him "this is just a shit idea that Roger had" - sarcastically, but with some seriousness. This tirade coincided with the end of the first orchestral segment. He said that they were going to do some just with the band and that we might be happy to get the orchestra back!

The rendition of Behind Blue Eyes was lovely and included 2 soloists who will accompany the band on tour, unlike the rest of the orchestra that will change in each city, as Roger did on his 2018 Tommy tour. Katy Jacoby is back on violin and Audrey Snyder on cello. They also were featured in the beginning of Imagine a Man.

Pete then told us that sometimes he likes to play around and write a song with his guitar out of tune, demonstrating his out of tune guitar. I was listening to him and didn't notice that everyone had left the stage but Roger. They then went into Tea and Theatre from Endless Wire, the song that closed ever Quad show in 2012/13. Such a joy to hear it again.

Back came the orchestra to perform some Quad. Surprisingly, the Real Me was not included but maybe it will rotate in for future shows. Also Dr Jimmy?

The Rock has been a high point of recent tours, with Roger typically taking a break offstage and Pete dominating the stage, playing freely and dynamically. The use of the visual screen was also so effective. I was oddly disappointed with The Rock with the orchestra. Pete was restrained, the piece did not build to its crescendo, at least to me. Roger stayed on stage, half heartedly hitting a tambourine. Maybe it will get better.

Loren Gold got to shine in the piano solo introduction of Love Reign as John Corey is not on this tour. Neither is Frank Simes, Billy Nichols is a welcome addition.

The orchestra enhanced Love Reign until the end when it just overpowered Roger's high to loud ending. The audience went wild though.

Band intros followed and then Pete announced back to normal - Baba, to end the show.

The use of lighting was very effective throughout but especially in the big songs like The Rock and Baba.

This was an extraordinary first show. It will only get better as everyone settles in with working with an orchestra. Technical glitches will be resolved on this and should be a fun show for casual and serious fans.

The Sound:
Super tough challenge for them to balance the orchestra and the band. And, to address the sound on stage, up front, and throughout the house.

Up front, the sound was TERRIBLE. It's never good. We all accept that that's the trade off of being "in the room" with them. But it was really bad. We could hear the vocals, the orchestra, Roger's tambourine, and the acoustic guitars (somewhat). We could barely hear Zak, electric guitars, or bass. Pete was playing plenty of electric, but we couldn't fucking hear it. And in spite of being just feet away, even though he kicked some ass, I could barely hear Zak at all. :-(

I'm not sure what the solutions are, or if there are any, but it's a real problem. I realize that there are more people elsewhere in the house than in the very front, but if they are going to charge exorbitant prices for the front (not "regular" PL1 prices), but fucking four-figure face value, they damn well better be committed to serving that slice of their audience.

Pete:
He was concentrating really hard, and as a result, not super engaged with the audience. No bad vibes, just pulled back and concentrating. He had the electric on, quite a lot - even one time, when I wanted him playing acoustic (during one of the early Tommy numbers).

Although we couldn't fucking hear it, he had a few nice rounds of electric guitar jamming. Unfortunately, most of them were with his back to us, facing Zak.

I'm One was great, as always. Drowned was fantastic with the full orchestra. And much to my surprise, I thoroughly enjoyed Eminence Front with the orchestra. It rivaled Vancouver and '96 club shows (at the piano) for my favorite EF.

Roger:
He croaked / "lost it" a few times, but overall, he was in great voice. Imagine a Man and Tea & Theater were both remarkable vocal performances. He flubbed some lyrics in the former, but the way he embodied those lyrics with the perspective and insight of his 75 years, was just profoundly moving.

No scream in the acoustic WGFA.

At the end of Love Reign, he just couldn't do it, but my personal experience in sharing that last minute of LROM with him was priceless.

Other Misc Song Notes:
Overture / I'm A Boy - usually I'm frustrated by Pete not playing enough electric, but here, he had on the electric, and I wanted to hear him acoustic.

Amazing Journey/Sparks was a little rough. Some parts were exceptional, but other parts were not fully in sync between band and orchestra. Particularly towards the end. They just haven't figured it out, yet. I consider it arguably their best song, night after night, but they have some work to do on this one. (Great Simon early on. Great Pete later on. And Zak was smokin', as always. But in all three cases, I could only SEE how great they were. I could not HEAR them.)

Interesting that Pete has come to terms with Acid Queen enough for it to be back in the setlist.

Punk was by far the strongest song of the night. It's where they were fully The Who and well augmented by the full orchestra.

Imagine a Man was my favorite. The orchestration was achingly beautiful, as was Roger's vocal.

Who Are You was weak. Join Together was weak.

WGFA was good. I would not mind if they dropped it from the setlist, but if it's going to stick around, it was more interesting to see in this format than the full electric one that has been flat and two-dimensional ever since John died. It was just Roger, Pete (AG), Simon (AG), and Zak. No Jon.

Much to my surprise, I thoroughly enjoyed the Baba. Never a favorite of mine (although always a great energy crowd pleaser), both the orchestra and Katie were GREAT. And Roger was uber-adorable, standing next to Katie center stage, and not knowing what to do with himself. And he shared that experience with his nearest and dearest (all of us) in the front row. Fun.

Video:
There was no screen behind the stage. There was a standard arena screen on either side of the stage. Absolutely no canned footage. Just live shot video - which I would be able to SO DRAMATICALLY improve.

The only time I missed the video were Punk and The Rock. Punk, because the early footage of the band that has accompanied the track in recent years is so cool. And it was really interesting how totally disoriented I was without The Rock video. That footage has become so deeply intertwined for me with the song. I felt lost. Even without it, though, I still felt the twist in my stomach at when John dies and especially, when the twin towers go down on 9/11.

Summary:
The show was more interesting than the setlist might indicate.

Personally, I very much like hearing Pete's compositions with full orchestration. I certainly wouldn't want this to be a permanent state of affairs, but a one-tour variation? Sure. It's cool.

I think David (Campbell) and Keith (Levenson) and whoever else was involved with the arrangements are doing a great job, for the most part, of maintaining the punch of Who-ness, while adding in the additional dimensions.

As expected, it was opening night, and really, dress rehearsal, the test run. If they can improve the sound, I think it'll be a great show. And hopefully, as they get a bit more comfortable, they will be a bit more adventurous in the band-only segment. I know they've rehearsed some cooler stuff. I have hope.

Soundcheck Note P.S. :
After Roger had left the stage, they decided to do a run through of Imagine a Man. Hearing PETE sing those opening lines, was right there, worth going to Grand Rapids. They ran through the entire song, but apparently, Pete doesn't know the words. He kind of hummed along. (Not really "humming." More like Ilsa "humming" As Time Goes By in Casablanca.)