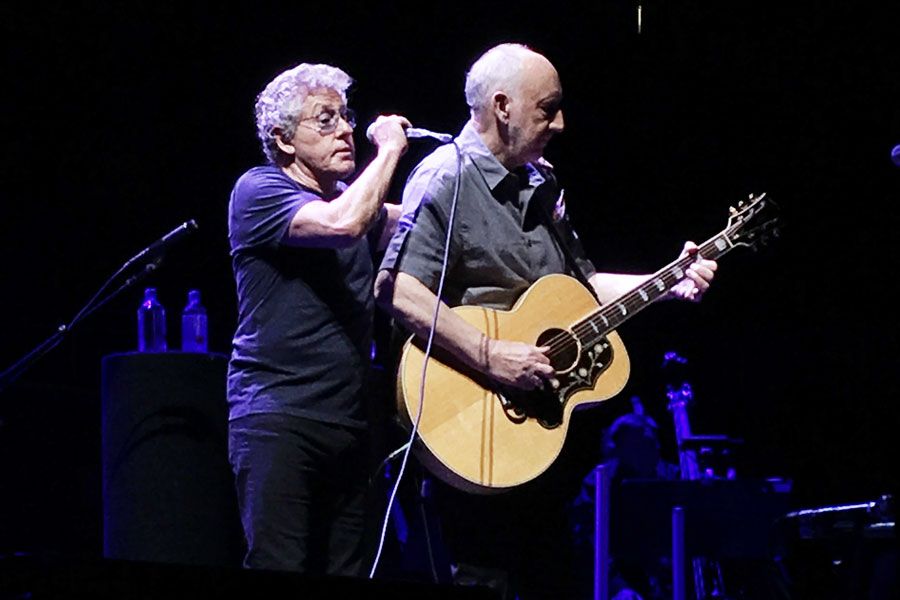 The last spring concert on the Moving On Tour was at the Pittsburgh PPG Arena and it was my favorite of the shows that I attended on this tour, although Detroit and Nashville weren't far behind.

The set list was similar to other shows, except Join Together with the orchestra was dropped and a sixth band song was added, YBYB. It joined Substitute, Miles, Behind Blue Eyes, and WGFA/Tea and Theatre with Pete and Roger only.

As we were waiting to go into sound check, we heard the band rehearsing a new song about a Hero. I was hoping it would be added for the last show but I guess that it wasn't ready. Maybe Wembley or in the fall.

Pete had fun talking about the new CD, saying the producers like it so much that the release is being delayed until Christmas. So all the young people can buy it for their Grandparents. He laughingly commented that the original release date was Father's Day, so they could have bought it for their great grandfathers.

Both Roger and Pete sounded strong all night.

Love Reign was the best that I experienced on this tour. Pete complemented Roger's singing at the end. He only does that when it is true as I have attended some less than great Roger performances and Pete is silent about his singing on those occasions.

With the orchestra, Roger's area to roam on stage is greatly reduced as he can't go much beyond Simon and Pete on either side. He makes use of the space he has, as does Pete, although he needs to be mindful of the range of his microphone swinging so as to not hit Pete. Couple of close calls. Plus a major microphone stage bounce that got Simon's attention and lots of laughing from Roger.

The orchestra really enhances the symphonic Tommy Overture, Sparks and Quad's The Rock. I noticed a few out of sync moments, with the orchestra going longer than the band. Not terrible but noticeable.

Both Pete and Roger were very complimentary to the changes in Pittsburgh, comparing today with the city when they toured in the 25th anniversary tour in 1989. They both enjoy playing in Pittsburgh and said so several times.

Pete was very chatty, with the laryngitis of St Louis long gone. He went off on a tangent about male guitar players versus female guitar players and which look better (he thinks male). He commented that most people in the audience are normal fans, attending one show but then berating the "lunatics in the front" that are always there, the same people all the time. Roger chiming in his agreement, both laughing the whole time.

In his intro of I'm One, Pete became a bit nostalgic, talking about how everyone is an individual but we are all collectively one and that he loves all of us. He repeated that he loves us then and again at the end of the show. It was the sweet side of Pete.

Both seem to thoroughly enjoy WGFA as they are performing it now. Pete goes rogue every night, much to Roger's delight as he is constantly grinning during the solo bit. Pete never plays it the same any night. They also are quite happy and congenial at the end of Tea and Theatre.

Pete commented on how much he is now enjoying working with an orchestra. He was honest in admitting that he was initially uncomfortable (very evident in Grand Rapids) as he is unaccustomed to the structure as that is not how he works but he and Keith/orchestras have adapted to it and he is having fun.

The use of an orchestra is not a gimmick. It gives a grandeur to some pieces, like the orchestral pieces, and additional depth to Love Reign and Baba.

This was my second time seeing The Who in the U.S. (I live in Japan). I love the atmosphere of its venues, and there was a warm and friendly atmosphere in PPG Paints Arena that night.

I was just in front of Simon. The string section was also close to me. I thought the sound balance was not very good there, but it was a great position to see the band.

The performance with the Orchestra was awesome on Tommy. I felt the songs got stronger, wider, and higher. But on Quadrophenia, the orchestra was sometimes off the beat. I think It was not the orchestra’s fault. It seemed difficult to play in sync with Zak’s drumming on Quad songs.

The acoustic version of Won't Get Fooled Again was great. It showed the core of "The Who". Roger's voice, Pete's guitar, and the audience. I enjoyed listening to their performance, singing along with them, and hearing everyone singing.

By the way, I am a big fan of Zak. So I was pleased that there was no shield around his drum kit. It seemed to be good for Zak and Jon. They might communicate with each other easily, I saw they often looked at each other, smiling and laughing during the performance. It was funny, but I liked to see it.

When I read the announcement of this tour, I was puzzled. When I knew the setlist, I was a bit disappointed. But it was the past. I really enjoyed this show. Trying something new is better than doing the same old routine.