The English footwear company Dr. Martens have recently released a special collection to pay homage to The Who!

Pete Townshend helped make Dr. Martens boots popular back in the 60’s when he started wearing a pair of their boots on stage. Pete made the boot iconic in 1969, when he began wearing a boiler suit and his Dr. Martens boots as a rejection of the flowery fashions from the psychedelic era. Pete said "I was sick of dressing up as a Christmas tree in flowing robes that got in the way of my guitar playing, so I thought I'd move on to utility wear."

The Dr. Martens website describes the collaboration with The Who as decades in the making:

When Pete Townshend wore a battered old pair of Dr. Martens 1460 boots on stage in 1967, he catapulted our modest workwear brand into the world of rock’n’roll, and music has been our heartbeat ever since.The Who‘s riotous live shows smashed their way to the top of the British mod scene and throughout America, we were there every step of the way. As the band’s fame and notoriety exploded, our 1460 boot became as iconic as Townshend’s infamous scissor kicks and jumps, becoming a symbol of rebellious self-expression. The guitarist and songwriter even credited his footwear for his energetic stage moves, claiming “With my new ‘Air Soles’, I literally started to fly.”

In Dr. Martens: A History of Rebellious Self Expression, Pete Townshend noted that “their toughness combined with their softness and flexibility is what made them so perfect for the pseudo-athletic routines I performed on stage”. Pete still frequently wears Dr. Martens boots when he performs today!

The Dr. Martens Who collection includes the 1460 boot, 1461 shoe, Adrian tassel loafer, Toomey and Pressler canvas sneakers, tshirts, socks and a leather backpack, all decorated with Who symbols such as the iconic target symbol and arrow.

The collection is available online now at their EU and US websites.

Dr. Martens have also set up large displays in their stores to promote the collection. Here are a few photos from their Seattle store. 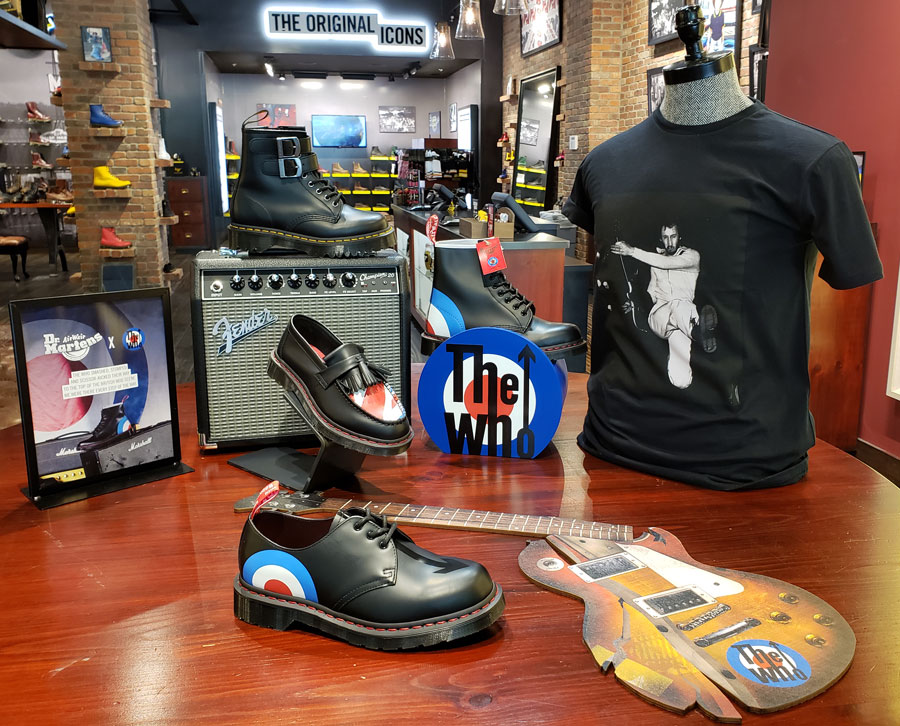 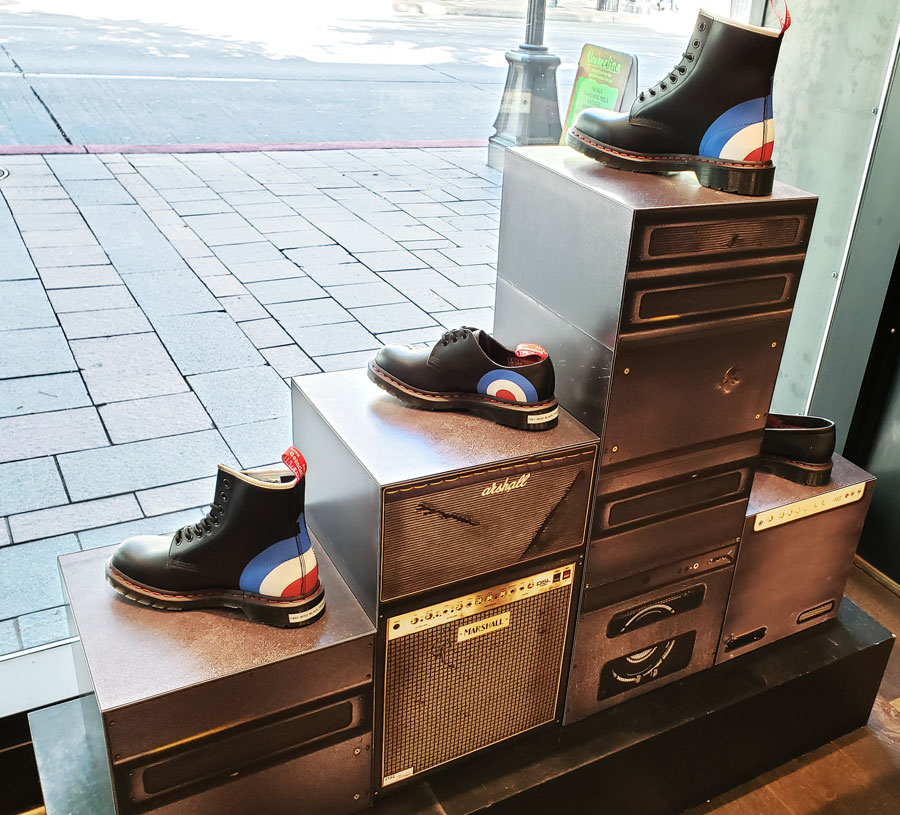 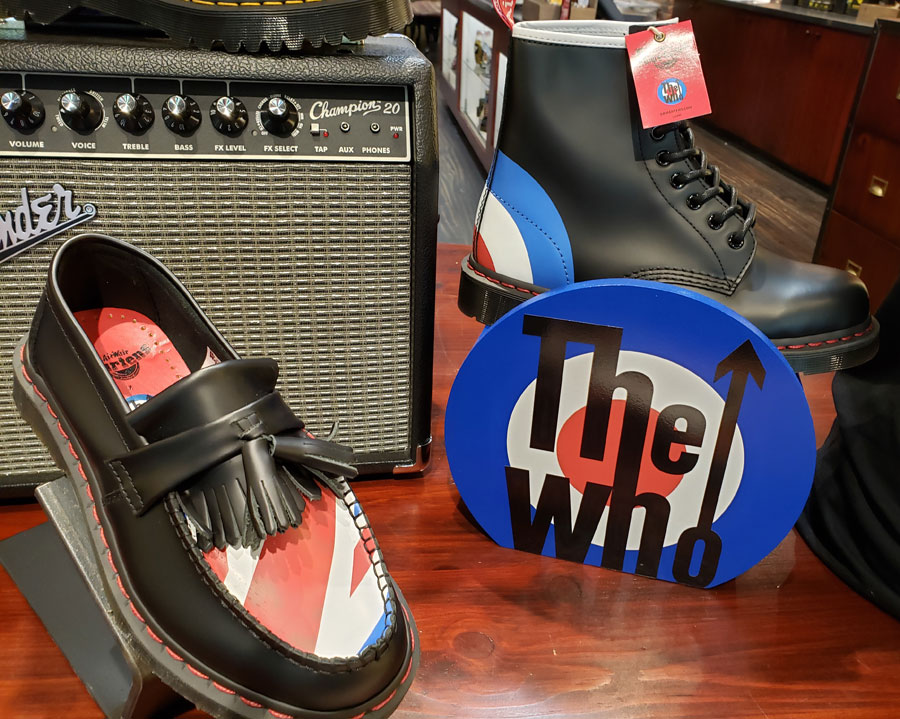 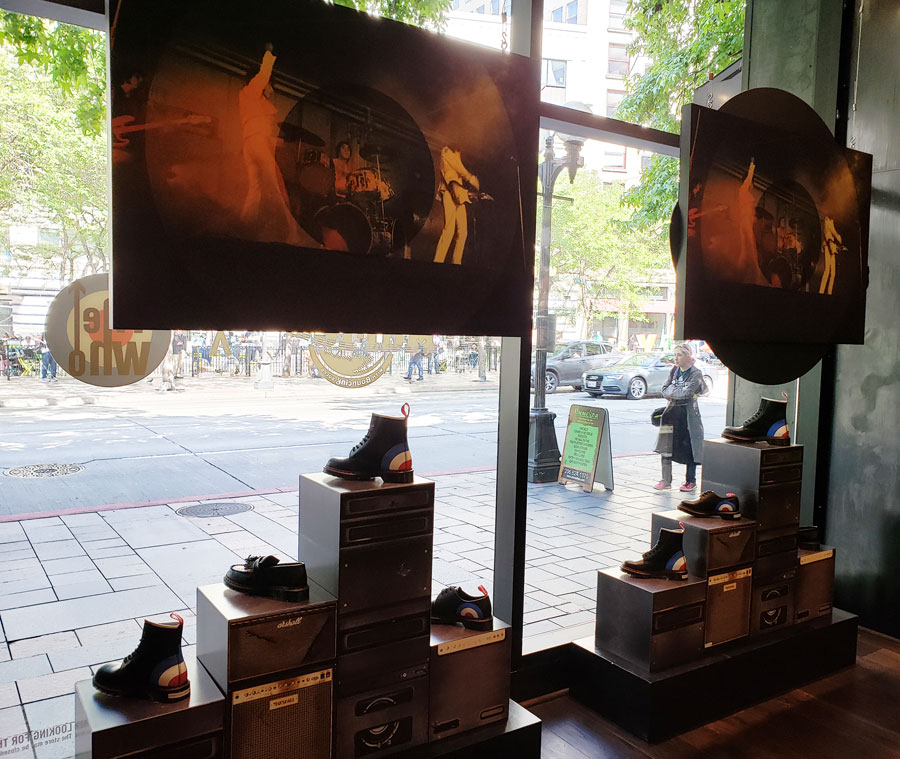 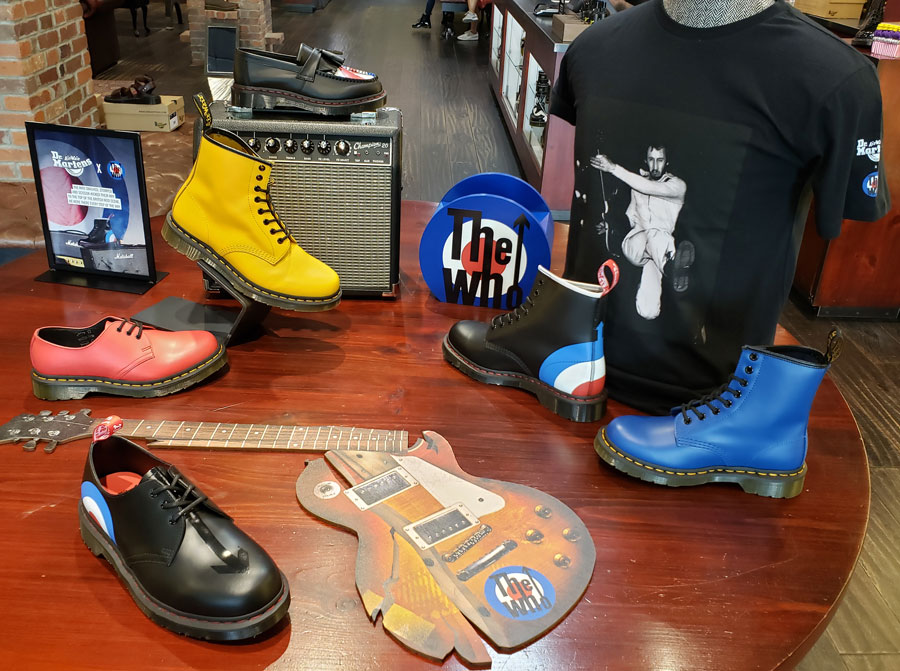 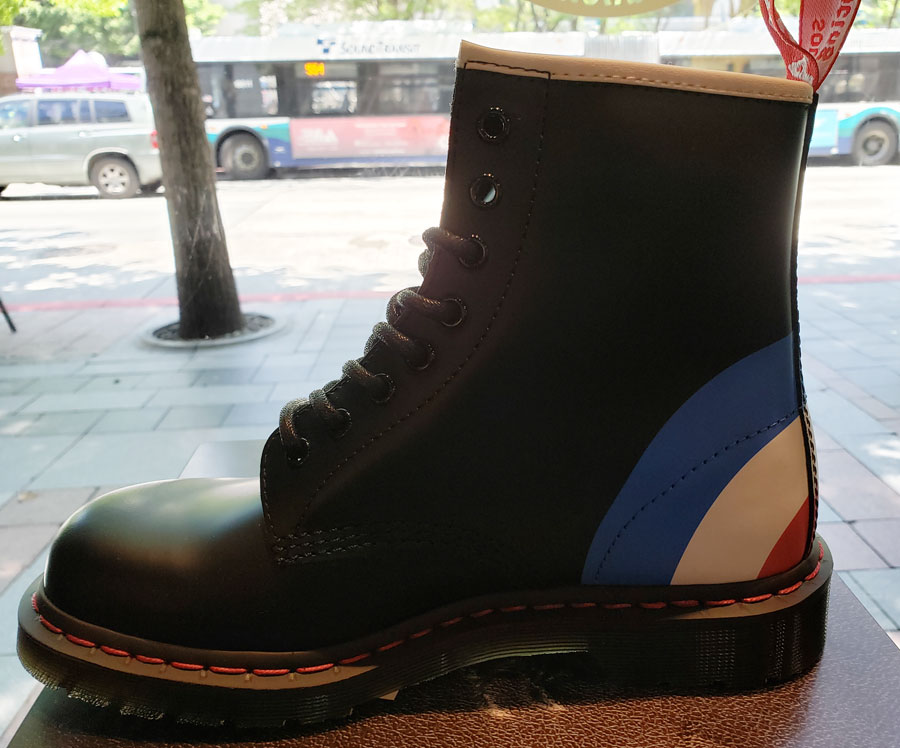 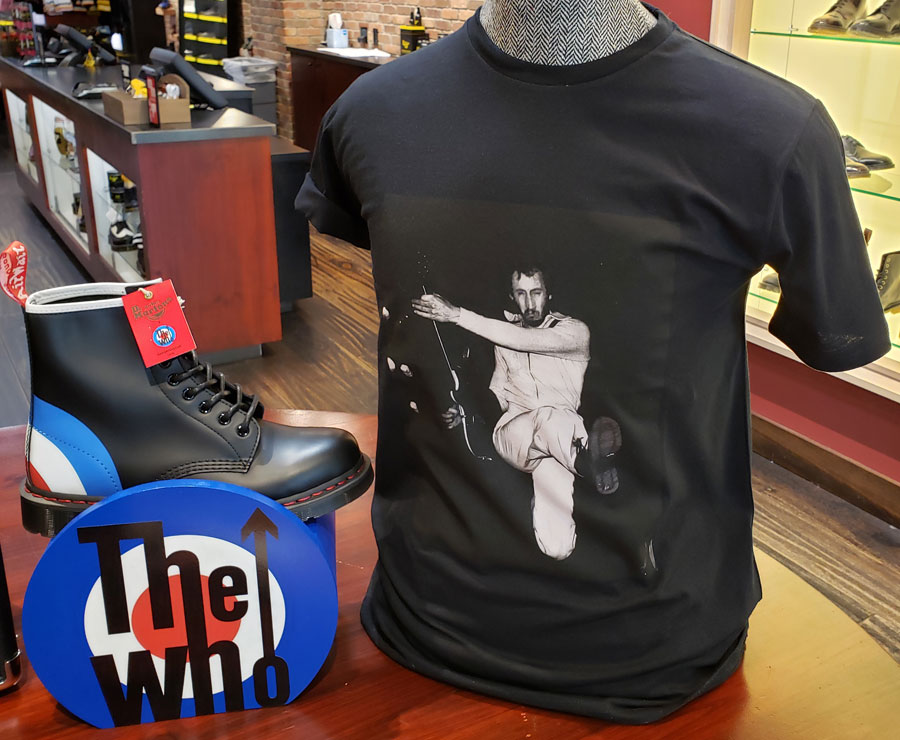 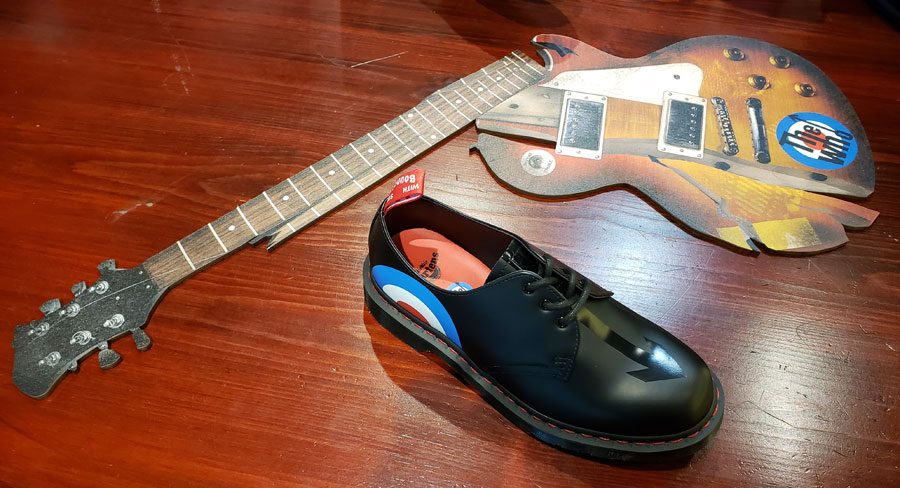 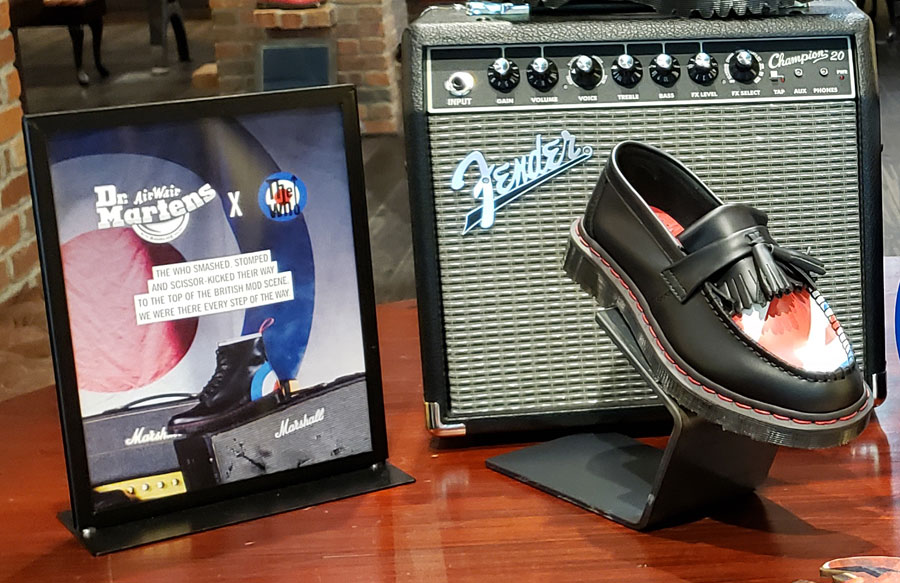