Pete Townshend gave a stunning performance Wednesday night at the Symfunny No. 2 charity concert in London's Royal Albert Hall to benefit Parkinson’s UK. The show was hosted by Jason Manford, and featured an evening of music and comedy. Pete performed I’m One on acoustic guitar, the extremely rare Football Fugue, and a beautiful rendition of Love Reign O’er Me. All of the songs were backed by a full orchestra conducted by his friend and colleague James Morgan.

Pete introduced Football Fugue as a tribute to his father-in-law Edwin Astley, who suffered from Parkinson’s disease.

“This next one is sort of the reason why I’m here. Because James, my colleague... we’re working on a piece together... James is composing and I’m composing, and we are having a battle. But it’s going very well. Also, my beloved father-in-law Edwin Astley was also a composer, and he and I collaborated on the next piece. He wrote the music, and I wrote the incredibly stupid words <laughs>. It’s about, you will understand… I’m sure you’ll get it… but it’s about that time when The Who went and played at Charlton Football Ground. We were the first band in the world to play a football ground. Now everybody does it. And this song is about that. Fugue!”

Pete also joined in a group sing along of Always Look On The Bright Side Of Life to close out the show. A grand time was had by all!

For more information, or to donate to this very worthy cause, please visit the parkinsons.org.uk website

Many thanks to everyone who provided photos, videos, and reviews for this event! 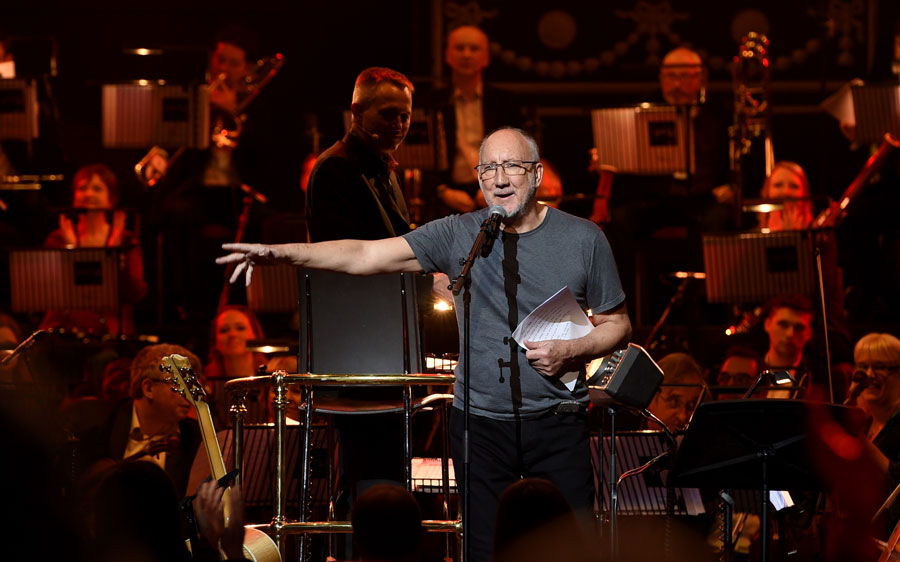 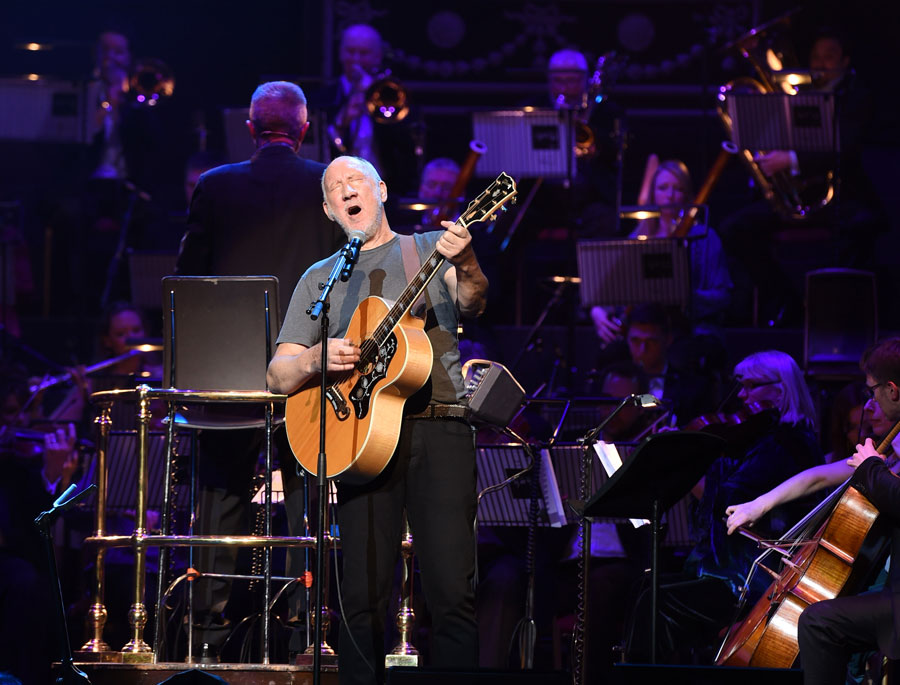 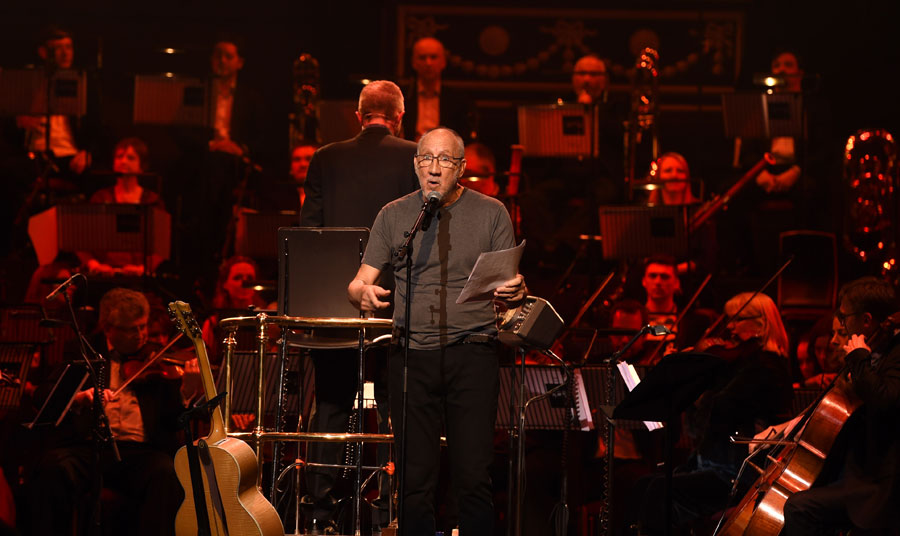 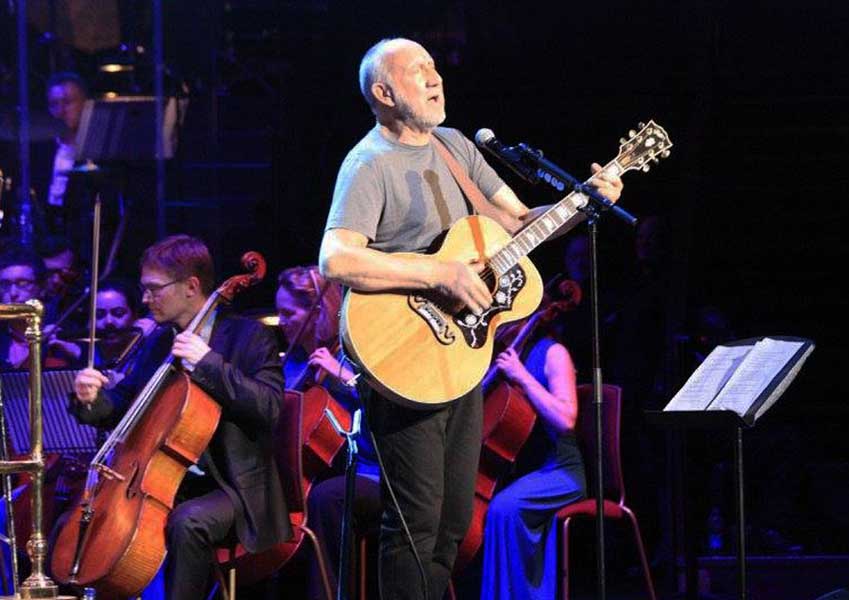 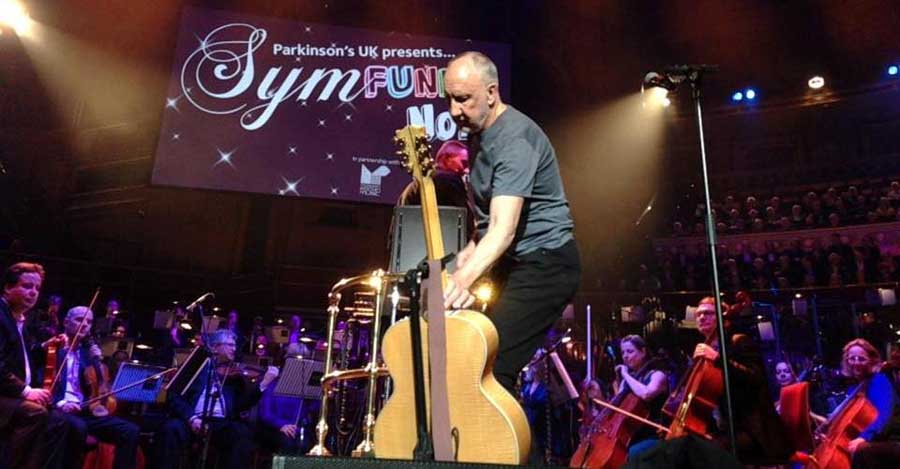 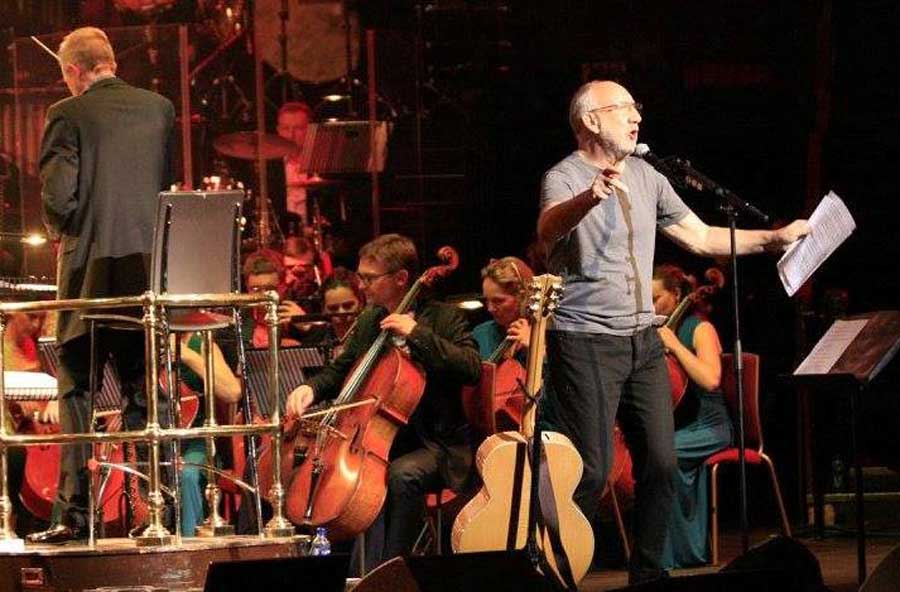 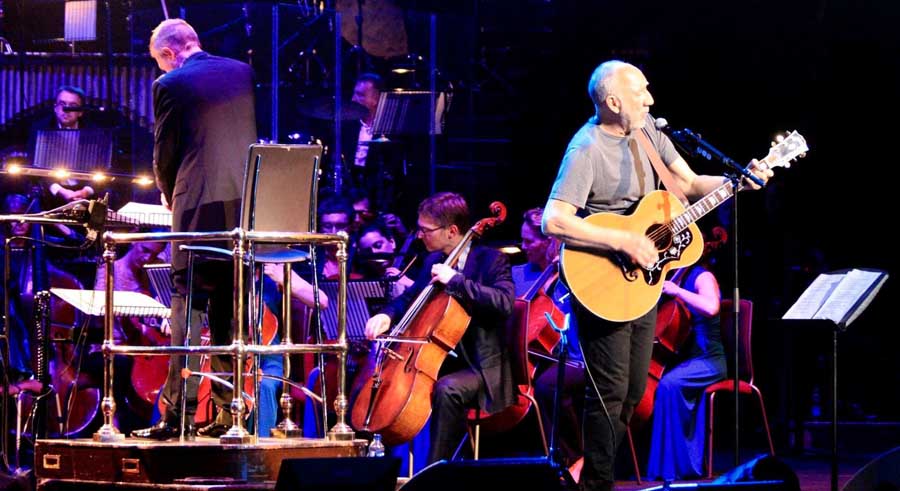 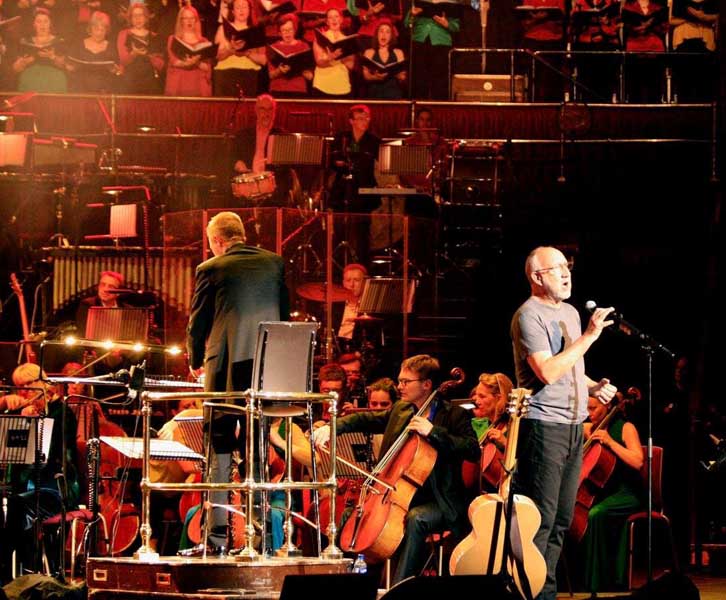 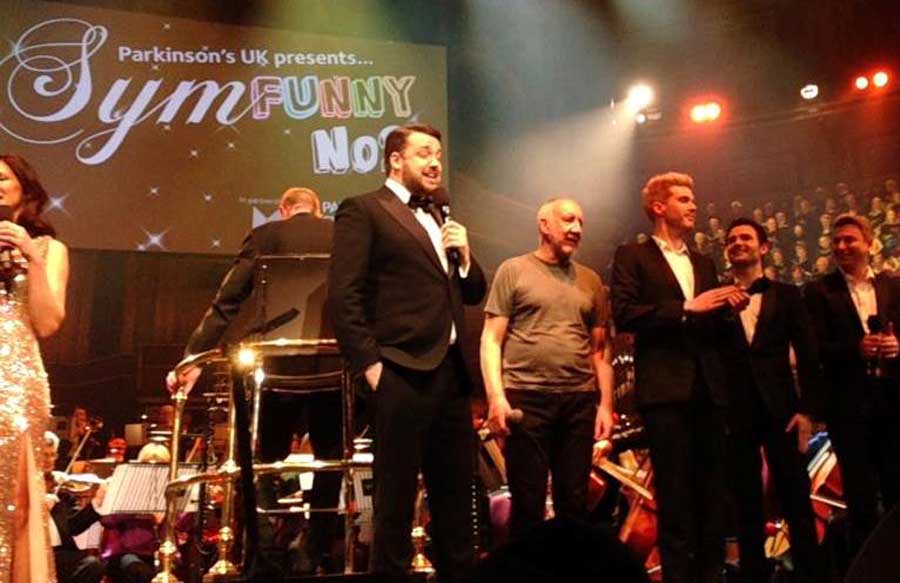 Wednesday marked the return of Parkinson's UK's highly successful and delightful charity concert to the great Royal Albert Hall with Symfunny No.2. The powerful star-studded bill provided much welcome laughter, levity and musical entertainment to offset the evening's educational aspect: bringing awareness to the cruel reality of the degenerative condition of Parkinson's, and the fact that a cure is still sorely in need of discovery.

The creators of Symfunny, Morgan Pochin (musical conductor/performer/composer power couple James Morgan and Juliette Pochin), also presented the second movement of their choral/orchestral work Invictus - A Cantata For Liberty, "No rack can torture me", which draws text from Emily Dickinson's poem of the same name. The moving piece is poignant and sublime in and of itself, but even more so because Morgan was himself diagnosed with early-onset Parkinson's in 2012.

Pete Townshend was the night's final performer, and as with the rest of the programme's play in contrasts, Townshend's performance was as well. Acoustic guitar comfortably in hand, Townshend opened with Quadrophenia's "I'm One", giving the audience a taste of the familiar; something we could all identify with and sing along to. Since his backing "band" was an actual orchestra, the song took on an similarly rousing but obviously less "rocking" feel. Nonetheless, it was great, and the crowd loved it.

Next in his short set, Townshend presented what was, for the audience, a real treat of a rarity, "Football Fugue" , but was, for him, the real reason he was appearing in Symfunny. In honor of his beloved late father-in-law, composer Edwin Astley, who suffered from and succumbed to the brutally debilitating throes of Parkinson's, Townshend wished to share "Football Fugue" which he co-created in collaboration with Astley. Introducing the piece with a light, almost cheerful eagerness - perhaps because performing this was for himself a great treat as well - Townshend explained with self-deprecation that his "incredibly stupid words" for the piece were inspired by The Who's historic May 18, 1974 Charlton Athletic Football Club stadium concert.

As the orchestra began, Townshend interjected with mock-pomposity, "A fugue...," and then several measures in, interrupted and asked if they could start again - to the audience's delight at his break in classical music decorum - saying, "I'll concentrate this time." Despite the jocular preface, it was clear that performing this piece well and properly was important to Townshend, not only for himself, but because he wanted to do it justice, out of respect to his father-in-law. And perform it well and properly he did. Not that the broadness of his range should come as a surprise to anyone, but Townshend's performance of "Football Fugue" had the feel of that of an accomplished musical theatre actor. Calling the performance in this setting a "treat" is a gross understatement. Seeing this wonderful piece performed live with an orchestra was momentous on its own, but, as well, it was a joy to see him truly enjoying himself and perhaps getting to stretch his wings.

As alluded to earlier, this special concert was balanced by performances of widely varying hues. The third and final offering of Townshend's set was indeed a contrast to the one before but only in dramatic tone, to continue the color metaphor. Introducing this piece by essentially saying he had 'some nerve' in performing it, as the last two men to have performed it were "Roger Daltrey - who does a pretty good job it," emphasizing the understatement of those words, and opera singer Alfie Boe.

As the song's piano intro ended, and exhibiting his typical ease and comfort on stage, Townshend began to sing with the words we all know. But hearing them sung by the composer himself, held by Rachel Fuller's rich and elegant orchestral arrangement, the song felt like an entirely different animal. Beginning so tenderly, "Only love..." Townshend's voice was strong, but had the raw tremble of vulnerability. Surely - without the usual "armor" of his guitar, or the shadow in which he typically stands as Daltrey singularly takes the front line under the spotlight - surely, Townshend himself would feel more exposed in this less familiar stance. But as he progressed through the song, it felt like a different kind of vulnerability. It felt like that of a man who had something of express importance that he desperately wanted, needed to say. It felt like that of a man - defenses stripped - reaching, pleading in supplication for connection and love at an existential, spiritual level. And mention must be made of the gorgeously deep and luscious cello solo which evoked the kind of heartache that paradoxically triggers both pain and pleasure. Bathed in a powerful white light from above, Pete Townshend's performance of "Love Reign O'er Me" was masterful, honest and literally brilliant, and demonstrated the ultimate power of artistic expression using nothing but the instrument of one's body, voice and soul.

Having just rocked the audience's soul to its core, Townshend cheerfully joined the entire lineup of performers for the night's final hit of contrast: a jovial singalong of "Always Look On The Bright Side Of Life" from Monty Python's Life of Brian. Eagerly crossing over to stage right, where the comedians were gathered, Townshend seemed happy and playful. For this audience member, it brought another tear to the eye and the words from another profound Townshend beauty, "...This is our chance / To sing and to dance and to clown..."

To make a donation to Parkinson's UK, go to parkinsons.org.uk/donate.

Pete came on the stage around 10:15 at the end of second part of the show. He was in good form and was happy. He said his father-in-law had suffered with Parkinson's. Pete said he was working and arguing with conductor James Morgan on a future project. Pete started his three song set with I'm one playing acoustic guitar with orchestra. Followed by Football Fugue, he introduced as this song was inspired by The Who being the first rock band to play at a football stadium, Charlton Athletic, in 1974. Pete said everyone plays them now! But we were the first! Pete sang the lyrics with zest and emotion and rocked with the orchestra in mid song. Pete finished with Love Reign O'er Me and he said it was last performed at the RAH by both Roger Daltrey and Alfie Boe. Pete sang with such vigor and love and respect for the song. He brought tears to our eyes. It was a piece of art! Pete said his farewell to the punters. The MC was Jason Manford and told us to join in with everyone and sing Always Look on the Bright side of Life. The performers from the evening came on stage to have a sing and whistle along to the tune including Pete. Pete whisked across the stage from one end to another to join the comedians and not the other musicians. He had fun singing and dancing. The MC announced everyone who performed and Pete got the loudest cheer of the night! Not only from Gary and I.