The full interview is currently available on the BBC website at https://www.bbc.co.uk/sounds/play/m000rgg5.

Pete shared a few great stories he had of the legendary artist. Here are a few excerpts from the interview.

Well this is a weird story. I was published from about 1964 onwards by a guy called David Platz who ran a company that published people like Leslie Bricusse and Anthony Newley, and people like that. I was one of his first or second generation song writers. His company was called Essex. And one day I was walking, I lived in Ebury Street in Victoria, and a shout came across the street from a mod looking guy with blond hair back combed up, this would have been probably 1966, early 1967, and it was David. He was with his then wife Angie, and he shouted across the road “Really loved your demo of Join My Gang”, which was a song I’d written for one of Robert Stigwood’s artists. And I said to him, “How did you hear that?” and he said, “I work at Essex and I’ve heard all your demos.” So what he’d done is, whenever I wrote a song I would send a demo to Fabulous Music, which was my company sheltered and hosted by Essex, and he’d been through all my demos and listened to all my songs, the ones I had recorded at home. I didn’t know anything about him. Anyway, I asked his name, and he said then, his name was Davy Jones. That was my first meeting.

He was always very, very charming to me. I have to say, I’ve never heard any stories about him being not charming to anybody else. There may be a few, I don’t know. How can I put this, he was a fan. There’s no question, he was a fan of what I did. I don’t know whether he was a Who fan, but he was certainly a fan of mine. And as a writer, how would I have influenced him? I think I would have influenced him because he never, ever tried to emulate the rather simple three, four chords, five chords at the most style that I wrote my songs in, and probably still do. He developed new chord styles, surprising chord styles, surprising melodies. His voice was semi operatic, it certainly didn’t have that rock howl that we became used to from Roger Daltrey and Robert Plant, and people like that. He didn’t try to be a blues singer or an R&B singer like Rod Stewart. I remember once with Keith Moon going to his flat in Sidney Street, when he was living with Amanda Lear there, and he played Marc Bolan songs all night. He was a huge fan of T. Rex and Marc Bolan. To be honest, I didn’t get it, I didn’t understand it. There was so much about David that I didn’t get in the early days. I didn’t get the make up, I didn’t get the theatrical stuff, I didn’t get the chameleon changes in direction. I was always a few steps behind.

We became seriously real friends quite late, ’81 or ’82. I was working on a solo album, and I had great success with my first album Empty Glass, which was pretty much a straight rock album. And I wanted to do something a little bit more arty, and a little bit more adventurous, and more poetic I suppose. I felt that The Who was still active then, and if I wanted to do a rock album, I could do it with them. It felt to me that the solo album area was a place that I could stretch out and take chances. And a lot of the people around me at the time were very, very discouraging. You know, “No, no, no, you have to do another album with another Let My Love Open the Door, and another Rough Boys. We need pop rock hits from you.” And David was incredibly encouraging. He loved all of the demos that I did, he loved the recording, he came and sat in on a few sessions in London. I then met him in New York several times and he came to a couple of my sessions there, and I went to a couple of his. And we hung out together. So that period was where we really cemented our friendship.

He smiled all the bloody time. He was a joy to be around because his physical presence was, it carried his charisma, there’s no question. I don’t want this to just be a fan club review of David, because I’m sure he had some faults, not that I saw any as I said earlier, but he was very easy to be around.

I think the last time I saw him I was working on an album with him, I think I contributed to a track on an album. We were recording in New York at Philip Glass’s studio [Looking Glass Studios], and it had one window, and in the window you could see the twin towers. I remember Philip Glass saying the joy of the studio is we sit here at the mixing desk and we look out and we can see the twin towers, the symbol of New York wonderment. And when I went back to hear the mix, about six months later, the twin towers were gone. And so had the album. He completely dumped everything that he was working on at the time, and the album was much darker, much grimmer, much more about really what had changed on that extraordinary day when the twin towers came down. How people that lived and worked in New York around that area… I had a photographer friend that lived right near where the towers went down, and he has never really recovered from what happened. I think David’s life in New York… he was living right in that neighborhood. I think it changed him. I think it made him darker. I think it made all of those people who lived there darker. I think it changed him, and I don’t know if he ever really snapped out of it. I think probably better than a lot of people, but it’s easy to forget that 9/11, for people who lived in New York at that time, was a devastating, dehumanizing, despiritualizing crash to earth. And the man who fell to earth, he fell to earth, I think. 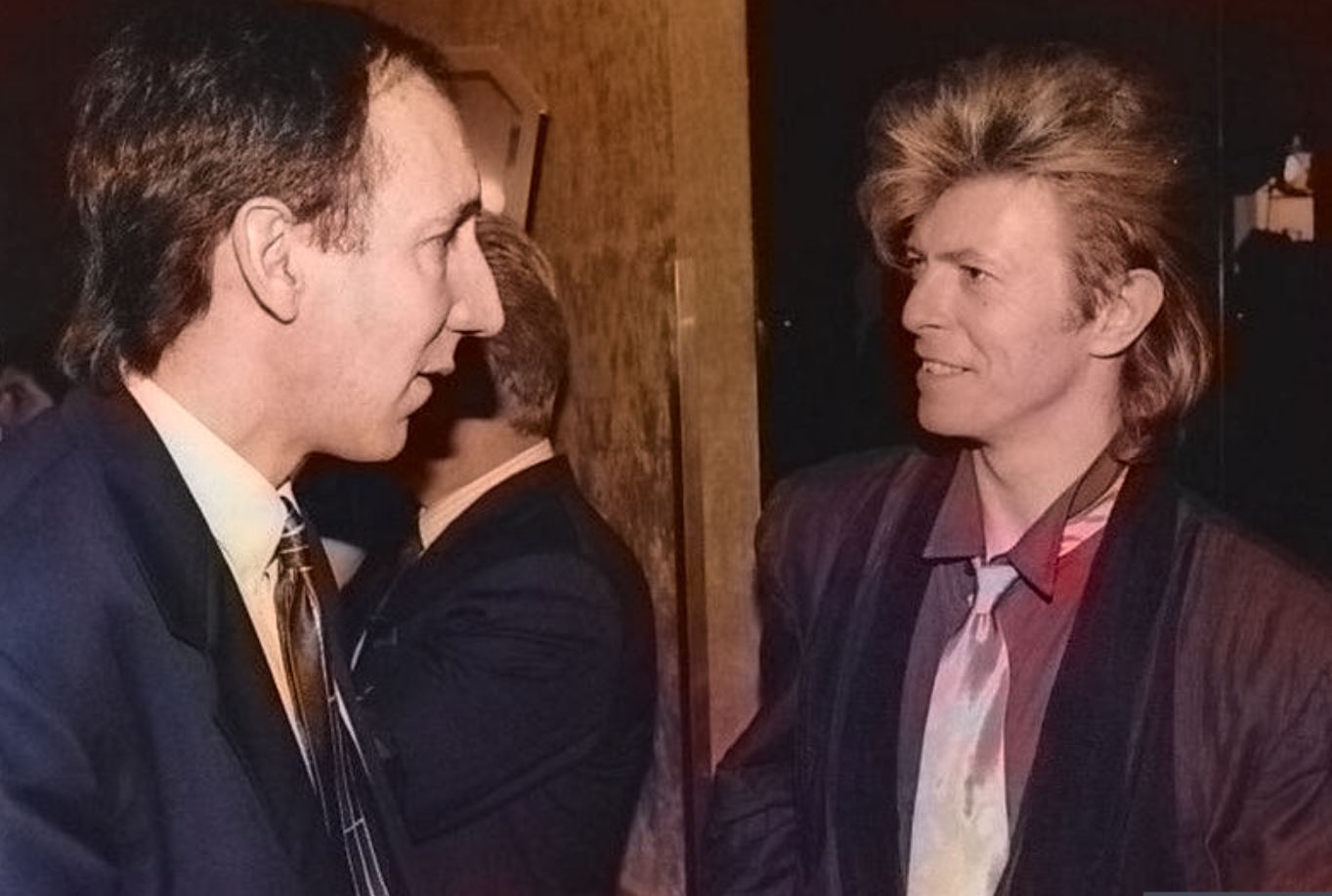