Pete Townshend and Roger Daltrey held a press conference today (June 30) at Ronnie Scott's Jazz Club in London, to announce The Who's UK tour that will kick off in Dublin on November 26 and wrap up in London on December 18. The tour, which will likely extend to North America in 2015, is a celebration of the bands 50th anniversary, and will likely be their last major tour, or as Roger dubbed it, the beginning of their long goodbye. Pete and Roger conducted a short Q&A with assorted press, and performed a 4 song acoustic set of Substitute, Bargain, The Kids Are Alright, and Won’t Get Fooled Again.

When asked why do the tour, Pete said “I want to do it. Sometimes I don’t but this time I do. It’s a significant anniversary.” Pete describes the tour as "hits, picks, mixes and misses". "A lot of our long-term fans are always trying to get us to play songs which are in the back catalogue. There's a slim possibly that we might be able to have a few of those in the mix. We could play Dogs (Part 2), Dogs (Part 1), Now I’m a Farmer [laughs]. We’re hoping there will be a few nice surprises for people that have seen us many times over the years." That certainly is good news indeed Pete!

Hopefully there will be some new songs to perform too. Pete discussed the possibility of recording a new Who album this summer. "I gave Roger three demos of three rough songs and happily he likes them. I really liked the pub rock sound of the album [Roger] did with Wilko [Johnson] and we may try to make the record in a slightly more basic way than we normally work, although a lot of my writing these days is pretty complicated. It’s more prog rock than pub rock!”

Pete also commented about fans taking photos and videos at the shows: “I’m a real technophile, so I love technology. I jumped on the iPhone when it first came out, jumped on the internet, and was one of the first people to use a business type website. And I love it. So one of the things that's clear is that if you run a website, you have to continually create content for it. The value of the content does go down quite a bit, but every now and again you get magical things that happen. So, I'm for it really. I feel that all of those people you could say are doing a job. Because what they are doing are taking that footage and they are sharing it, and as long as we look alright, and we're playing ok, then they're sharing something with us that we used to have to pay people to produce for us." We will certainly do our best to post some great fan photos and videos here on petetownshend.net during the tour! 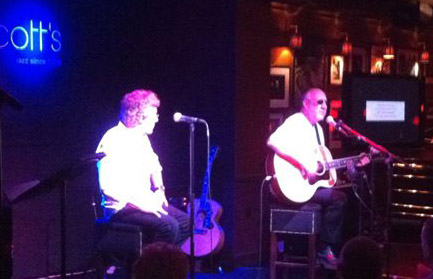 Photo: Chris Charlesworth - Check out his Just Backdated blog about the press conference!

The BBC have also posted a video of an interview with Pete and Roger up at BBC.com.

Here is a recording of the complete Q&A.

Presale tickets are on sale now. Tickets go on sale to general public on Friday (July 4).