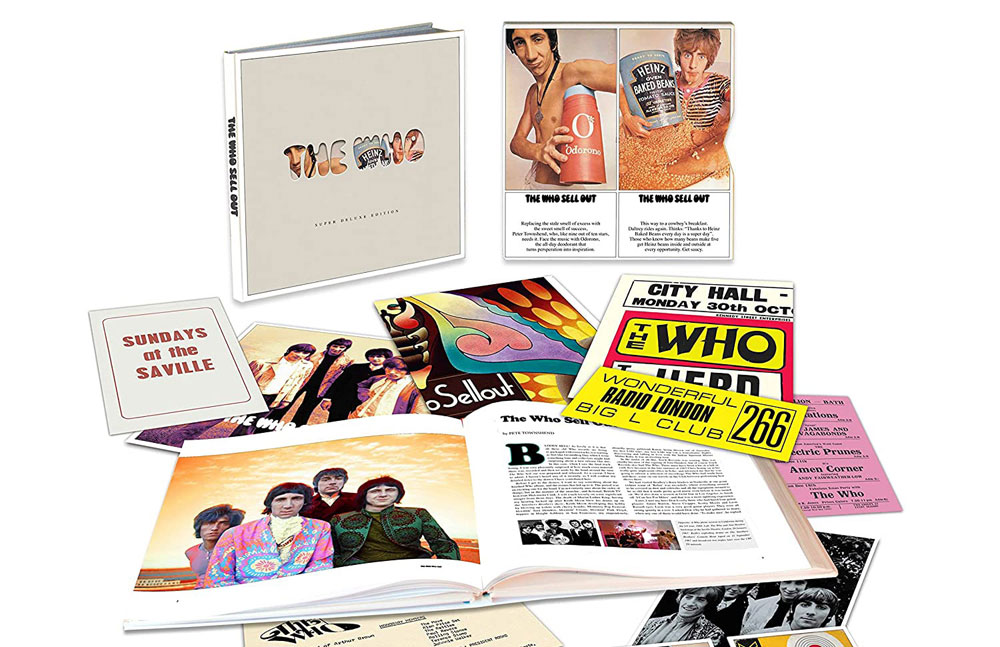 The Who have released a new Super Deluxe Edition of their critically acclaimed 1967 album The Who Sell Out, which hit the shops on April 23.

You can pick it up today at your favorite local record store, or order it online here.

The extensive box set features 5 discs that are packed full of goodies, including rare out-takes, Pete’s demos, mono and stereo mixes, ads and radio jingles, and songs recorded in the period leading up to Tommy. There is an immense amount of material to pour over, and it’s a real joy to revisit this often overlooked gem in The Who’s catalog.

What really stands out is how fresh and vibrant the music still sounds today. The multi-part vocal harmonies are stunning throughout, and the instrumentation is lush and full. It’s fun to listen to the various stages of production to see how the songs evolved from Pete’s original demos through the various out-takes to the final mixes. There is a lot of really interesting experimentation going on, especially with the guitar parts. Very psychedelic stuff with backward guitar and sound effects, and also a lot of acoustic guitar. It sounds like everyone had a blast in the studio making this album.

Pete Townshend’s storytelling on The Who Sell Out is brilliant. The songs are such lovely little slice-of-life vignettes, and while the songs were randomly compiled from material Pete had at the time, they all fit together really well. The concept of recording ads and radio jingles to recreate and celebrate the recently decommissioned Pirate radio stations was pure genius. It’s no wonder I Can See For Miles was the first breakthrough hit The Who got in America. The song absolutely popped out of the airwaves every time it played on AM radio there. The Who Sell Out was the perfect album for the swinging 60’s. Pop art at it’s grandest!

The packaging of the Super Deluxe Edition is very high quality, and includes a nice selection of printed replicas of various posters and inserts from 1967, and a couple of 7” vinyl singles. There is also an 80-page hard back book that is full of great photos and articles, including a nice essay and liner notes for the demos written by Pete Townshend. The entire box set is very impressive, and is a must have for Who collectors!

To promote the release, Pete went on a publicity blitz to talk about the project to various media outlets. He also appeared in a great new Classic Albums documentary on the making of The Who Sell Out which premiered last weekend. 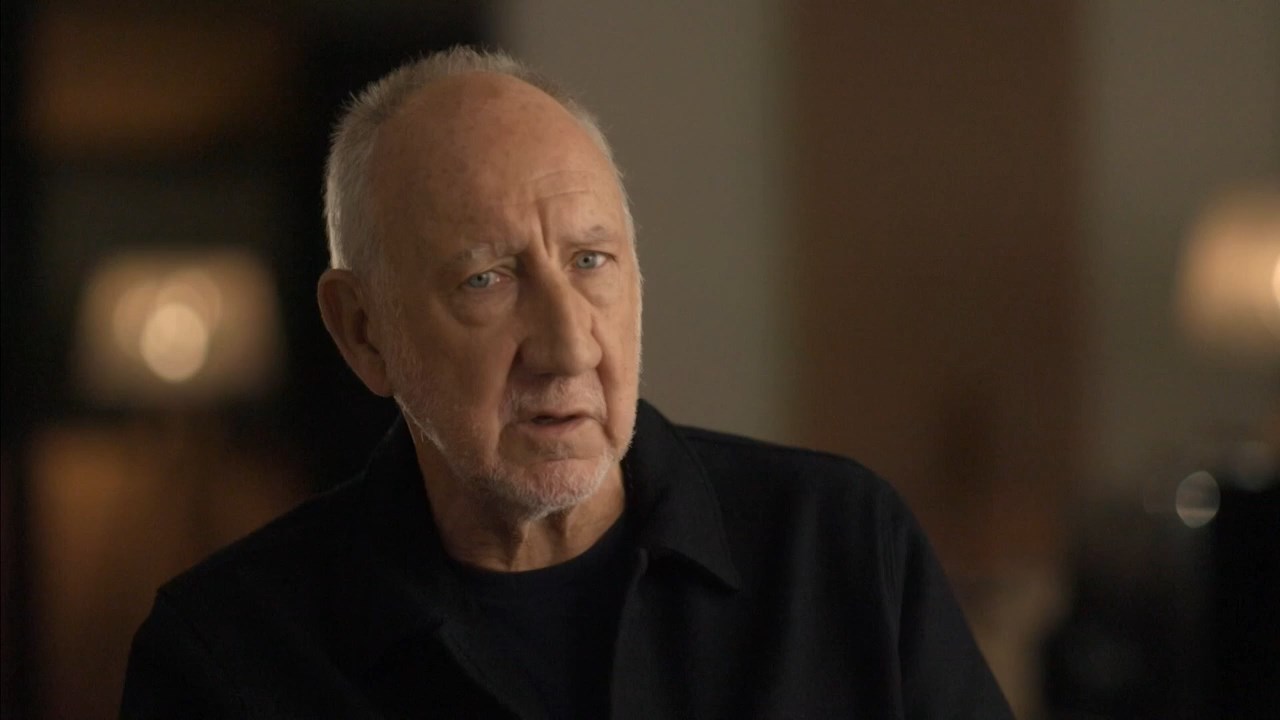 Here are a few excerpts and videos of Pete’s interviews:

The thing about that period was that I loved the variations, the experiments, the things that were going on. The fact that you could do anything in that time. It was a really extraordinary time.

When I was thinking about doing this interview, I thought what I have to get across here is that we wanted this to be fun. That’s what we wanted. And just thinking, you know, where’s the fun of the old days? People taking the piss out of themselves. Where’s that gone? So I think this album was meant to kind of bring some of that back.

It wasn’t a concept until the day that we walked in to get photographed in tubs of baked beans. It was only at that photo session that we learned that the name of the album was going to be The Who Sell Out, which is a brilliant title, of course. It was only on that date that we learned what the cover was going to look like. Things moved very quickly in those days. Days before that, Kit Lambert sent me Side One of the album to approve that had all of these wonderful commercials, and some of the jingles that we’d recorded.

My idea had been much more restrained, much less complete a vision. It was simply that we’d have some jingles on the album, that was all. I didn’t think of actually adding radio jingles. I just wrote “Odorono” and a couple of other songs about products. We did a few goofy, fun things in the studio. We did that because we didn’t feel that we had enough strong songs for a complete album. Our managers owned and ran Track Records and they wanted another album out. They were going to put it out, whatever we said. And so me and Chris Stamp, the other Who manager who was involved with Kit Lambert, who was our producer then, we had this brainstorming session to turn it into … like a day’s chapter from a radio station, to give a framework to what I thought was a too-varied bunch of songs.

It was a very strange time, and the Who’s live performances from this period would have been brutal, verging on heavy metal. Despite the fact that we were dressed like Christmas trees, it was still pretty brutal. And yet the songs I was writing were very, very light. It was before I got an interest in Meher Baba or any sort of metaphysical ideas. But they are romantic and slightly mystical, a bit hippie-ish I suppose. But we felt the album was weak and it needed a framework.

I’d had the most intense, amazingly huge acid trip on the plane home from the Monterey Pop Festival. My mind was blown to such an extent that I realised that I had to start looking at the spiritual and the metaphysical. So that’s kind of where I was. The Who Sell Out songs are interesting because they’re the beginning of me looking at what lies beyond. I don’t really know that the band – Roger, John, Keith, maybe even Kit Lambert – were that mad on me going down that road. I felt the full wave of support for that metaphysical stuff a little later, with Tommy. I think The Who Sell Out was tough for all of us. For example, I remember a lot of sessions at De Lane Lea [studios] when Roger just wasn’t around. That’s why I sang quite a few of the songs on the album. I think Roger would’ve heard a song like “I Can’t Reach You” and just though, ‘What the fuck is this about?’ Not because of a lack of intelligence or willingness to take on new stuff that I’d written – but I think it was just that we were in a strange place. I felt that a lot of it was stuff that was necessary for me to write about, to touch on, to explore. I didn’t particularly want The Who to have to carry it. So when we got together with the marketing guys, Kit Lambert decided to take the idea of doing a radio show a bit further and bring commercials in. I remember thinking, ‘Thank heavens.’ In a sense, it saved what could otherwise have been a kind of Moody Blues exercise.

It’s an assortment of stuff from different places. The interesting thing is that when the material was gathered, I remember going into the office and saying, ‘We don’t have an album!’ But then we brought in the last burst of creative energy with the adverts. So when we finally got the whole album package together, I remember thinking it was like the closing of a chapter. It was the last word. The art directors suggested calling it The Who Sell Out. It’s just such a fucking brilliant title, because in a sense, everything The Who have done since has all been about burning not so much the family silver, but the authenticity, originality and coolness of The Who’s first two years. Everything else rides on that moment.

I think I was just writing for myself and hoped that if I wrote maybe 20 or 30 or, on a good run, 40 pieces of music, at least 20 would get recorded and then we could handpick maybe 10 to 12 for an album. It was like throwing shit at the wall. Chris Stamp, our manager, told me, ‘This album is coming out whether you like it or not.’ I said, ‘Well, let’s try to dress it up in some way.’ We were walking into the studio with a) not enough songs for an album, and b) most of them which were songs I had written for fun. The only way that I felt that we could save the record was to turn it into a fun exercise, and so the idea of the commercials — which came from a brainstorm session between me and Chris Stamp — became the way to do that.

As part of the promotional campaign and to raise money for charity, The Who teamed up with Heinz to release limited edition cans of ‘Beanz Meanz The Who’ baked beans, as a nod to the iconic photo of Roger soaking in Heinz baked beans on the cover of The Who Sell Out. Pete Townshend and Roger Daltrey signed 50 of the cans, and a large replica that was auctioned off. All proceeds went to support Magic Breakfast and Teenage Cancer Trust. 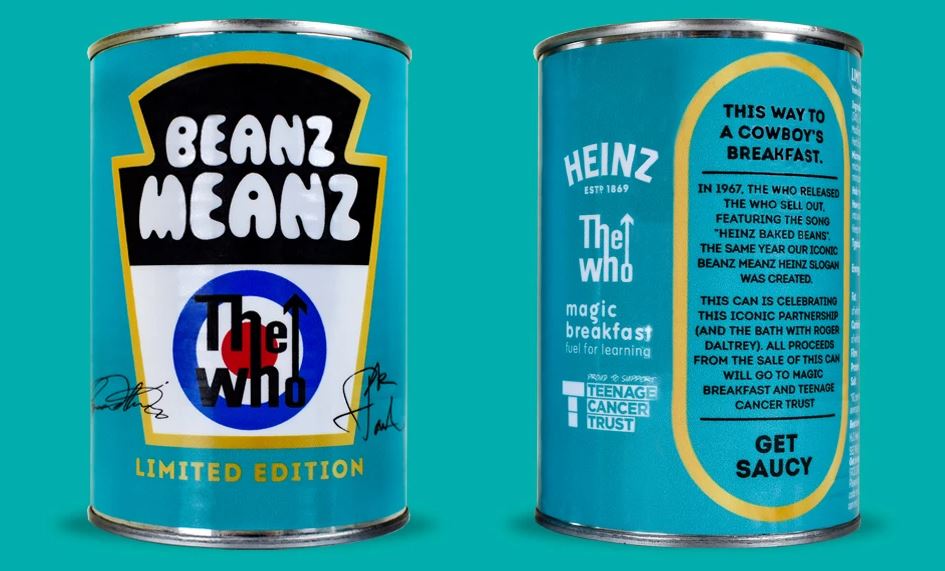 The Who Sell Out Super Deluxe Edition contains:

CD ONE: THE WHO SELL OUT - MONO ALBUM

CD TWO: THE WHO SELL OUT - STEREO ALBUM

Most tracks on CD 3 include studio chat, all tracks previously unreleased in this form.

All previously unreleased and exclusive to the Super Deluxe Edition.