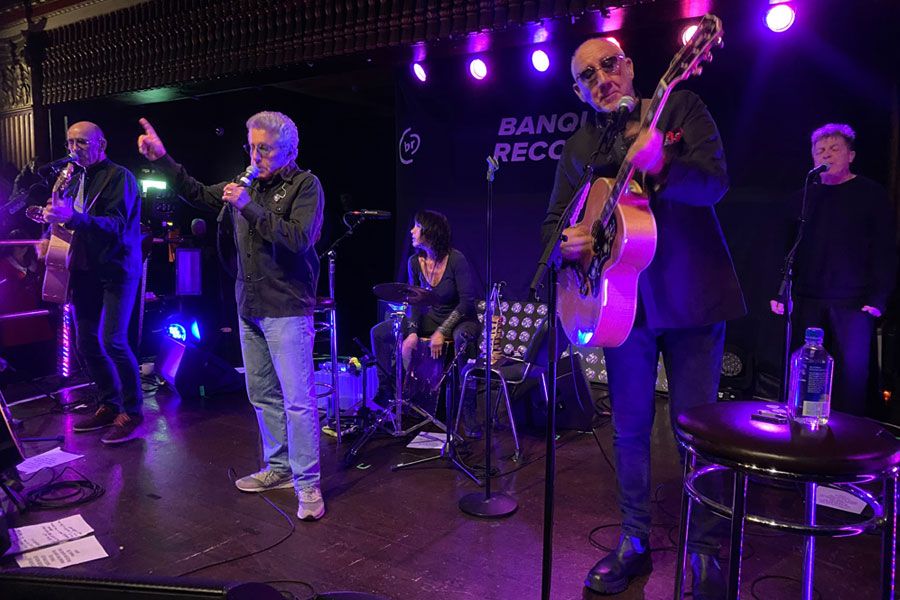 The Who concerts at Pryzm were sold out in seconds. It was apparently a place that they had played 53 years ago. Capacity around about 1,200 people. Not good vantage points for seeing the gigs unless you were lucky to get a good spot. TICKETS were the cheapest prices for years. About £13 each on average but depending on various purchase of the album etc. I must say that being a fan I tried desperately to get tickets but had no luck despite valiant efforts by good friends with some resulting confusion, but eventually all working out well.

Bit nippy but The Who always or nearly always seem to play in London or the UK when it's cold. These gigs were supposed to be promoting the new album WHO. And to commemorate the recording of their landmark Live album recorded at Leeds University on Valentines Day in 1970, but during before or after all four shows surprisingly no mention was made of Live at Leeds at all!

Finally met a friend who had a possible spare ticket for the first show and as I was able to get this first one they had just started letting people in. TWO blokes were selling bootleg Who t shirts for £10 a piece and were quite nice. I bought one after the last show. Not much in the shape of freebies or anything. What I mean by that is in the US I can remember radio stations handing out free stickers or small souvenirs with the gig and their name on or you could have just been handed a flyer or paper hat or something! None of that here!

It soon became clear upon entering Pryzm that unless you joined the queue at ridiculous hours like some will do you are not going to get even a half decent view of the stage or band. Really not a good place to watch a Rock band play.

Anyway on they came and after some interesting stage banter they started to rock the house with a brilliant Substitute. I'll say it again gone are the big amps, lighting rigs, drums, though Jody Linscott did provide percussion. NO loudness or windmills and leaps and jumps and daaaannngg etc. But they still rocked. I could see loads of people hands in the air punching the air and some of them were doing the jumping haha! Others were nodding and I did a little of each I guess.

Pete and Roger were in a banter mood with lots of exchanges with the audience. Pete saying too that he did not really want to play these gigs and after would look to kill their Manager for making him play them! You better watch out Bill me old son!! Ha ha ha ha! He also said after a bit of a cocktail up that we could have our money back so I put my hand up !!

I have to say that after seeing them play last year, this scaled down acoustic event absolutely blew me away!!! Really, they are so creative with the way they play and they just make it work. I never missed the loud the bang of glam or whatever despite the fact that my ears are still ringing from the Lyceum in 1973.... No this works and I honestly believe that they enjoyed it as much as I did!

The two gladiators have found a way to make this work and to sound great at the same time. With Pete, Roger and Simon playing guitar plus a bass player whose name I can't remember (Phil Spalding) and Jody on percussion it seemed to sound great. AND with the great Billy Nicholls as a backup vocals, it all fitted into place.

I wanted to talk about the new songs. Like Wembley Stadium last year they decided to play two more from the new album titled WHO. I guess that over the years I've been spoiled by Who albums ranging from My Generation all the way up to Who are you and beyond. I say this because they all contained great ballads and rock anthems which did not take much listening to before you just knew that this is really brilliant stuff. I think this new album however for me anyway is different and not so easy to digest. I have given it a go honestly yet it seems to have erected an invisible fence between me and it. I will concede that Simon Townshend 's song on the album is really having a big effect on me and I love it. On the first night they had some difficulty playing it which led to comments that this album was actually not an easy thing to play which was a fair and honest statement. ..shades of Quadrophenia anyone?

The set is short, approximately nine songs. On the first night by a show of hands and yelling, The Kids Are Alright was chosen by the fans over the shorter but brilliant Tattoo. But on the last two gigs they played Tattoo anyway, much to my liking having first seen them play it at the 1974 Charlton concert. Incidentally they also did a shorter improvised version of TKAA on the last night as an answer to some sort of challenge I believe but am not quite sure?

Harking back to the first night when Pete said he really did not want to play these gigs, it was their Manager who made them do it, he reflected a bit at the end. I think having come to the realisation that he, Roger and the others had indeed enjoyed playing, and for a brief moment he and Roger discussed the simplicity of putting on this event without the complications and perhaps economic problems and costs of alternatives! I quite enjoyed that!!! Makes a lot of sense. Though tickets at £13 may never possibly happen again!! Still I'm impressed by the very creative way they went about playing and I have to admit this format works. I love all that went before, oh yes I do, but to still be seeing one of the last great Rock bands in the year 2020 I never thought I'd be seeing this ....then what is it? I'll take it!!!!!

PRYZM... What a Wholiday that was! A lovely shithole with fucked up queuing (even dangerous; try to run zig zag through a dark lobby with disco lights on, what the f@#$!) but hey it was well worth it!

I got tickets for the three shows except for the Friday late one. Man, those were stressful to get! Tapping my phone like a bastard!

Reacquainted with a lot of friends online weeks before the show (and started to get active on Facebook); it was nice meeting y'all! Plus got to meet many more nice people!

So, I always say good karma gets you were you need to be. So yeah, I got a ticket for the Friday late show as well!

If I had to pick ONE song from every night at the PRYZM (which sounds a lot like "prison" the way the English say it, funny overhearing people on the phone saying "yeah, I'm in the queue to get into prison"). This would be it:

1: Pinball Wizard
Never thought that one would blow me away the way it did... We all know that tune, and over the years for me it kinda became like the obligatory hit to play... But Pete going ballistic strumming his acoustic guitar and shouting "THIS IS FUCKING GENIUS!" blew me away... PLUS... The audience interaction was the biggest EVER on that song. It was loud.

2: WGFA
As like the first show, just Pete and Rog. But this one had some nice picking on it! Kinda reminded me of the WGFA like Pete played on his acoustic shows that got released through eel pie records. I really like those albums and so I was really into this one...

3: Three Steps To Heaven
OK, not a full song, but wow. This was a gem. Spontaneously added to the set as Pete was saying the "woop woop wooooo" at the end of Squeeze Box was inspired by an Eddie Cochran song. So someone up front said (!) (yes said, not shouted, you didn't even need to shout to have an onstage conversation with them!) "Three Steps to Heaven". Step three being she leaves you and takes all your money. [insert John Entwistle grinning in heaven smiley]

4: Tattoo
Yes... The gem! Roger forgot a verse on show 3, so this was a full one. Nice banter about tattoo's.

Overall; this line-up really worked! To me, I prefer it like this any time over a full electric line-up nowadays. Some of you may know I kinda vanished off the grid after John died. This rekindled the fire. It's not the same, but I would tell you with a bit of an understatement it's not worse either! It's different and it's still The Who. Incomparable to all the other line-ups.

I also think if it's this small line-up like this it gets closer to "The Who". All the extra violins, mandolins, keyboards, etc. distract from the raw diamond that is Pete Townshend and Roger Daltrey doing their thing. So this is really the best you can get IMO...