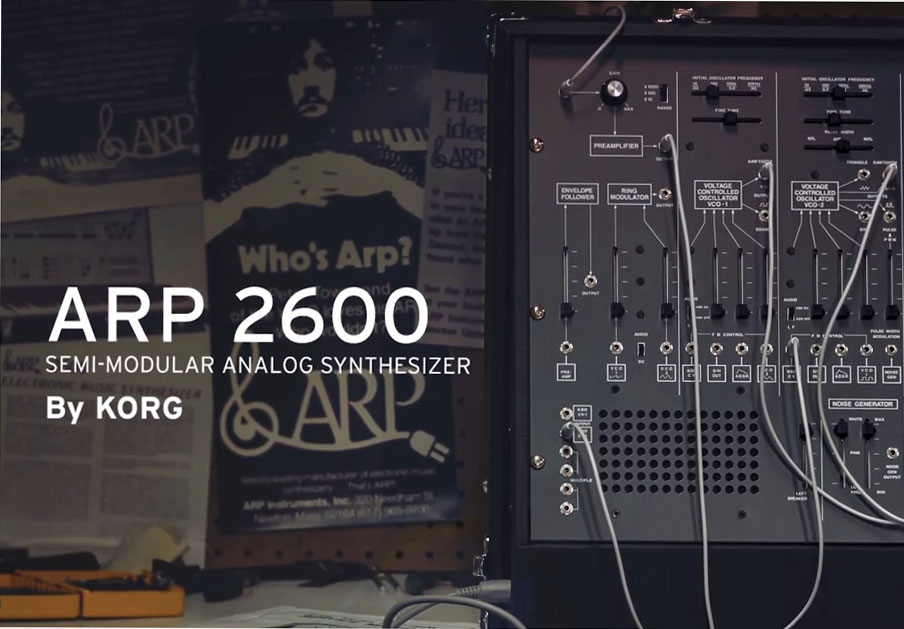 Korg announced the exciting news this week that they are reissuing the iconic ARP 2600, the semi-modular analog synthesiser that Pete Townshend recorded with in the 1970’s.

The ARP 2600 was created by Alan R. Pearlman, and was originally produced between 1971 and 1981, competing with the popular Minimoog synthesiser. It was a portable version of the huge ARP 2500 fully modular synth that came out in 1970, which was also used by Pete in early Who songs.

Pete Townshend was an early pioneer of electronic music, and embraced the complex technology when analog modular systems first came on the market. He loved the ARP synthesisers so much that he sent ARP promotional photos of himself with the ARP 2600 to use in advertisements.

Pete used the ARP 2600 extensively throughout his soundtrack for the 1975 Tommy movie. He also used ground breaking techniques to record the songs Relay (1972) and Who Are You (1978), which he created by plugging his guitar directly into the system to achieve the distinctly unique rhythmic synth sounds that are now legendary.

In a new video documentary produced by Reverb about the ARP 2600, The Who’s keyboard technician Brian Kehew discusses and demonstrates how Pete was able to get those effects using the synth.

Who Are You: “[Pete] told me it’s no amplifier, no pedals, just overloading the pre-amp for distortion, and that runs through the filter. You got a left and right component, panning it back and forth using the ring modulator for that. So it’s a pretty complex patch and what makes it so interesting is the aggressiveness of his typical guitar playing, the fuzz of this synth running through the filter, and then panning back and forth, but responds to the dynamics of his playing. On the right side of the patch that he’s recorded there’s a bit of low pass filter going on, and getting brighter and darker. And it’s responding to how hard he plays, so he’s most likely using the envelop follower on the far left, sliding strings, bending notes, hitting harmonics very gently, power chords that fuzz out, and then you get this aggressive nature, but a kind of an up and down effect that most keyboard playing, even a dynamic keyboard could never get.”

Relay: “It’s a very simple patch. The random nature of the Sample and Hold controlling the filter, so he can play the rhythm guitar. It’s clicked by a click track, and the click track triggers the Sample and Hold, so that on the beats you get a sample of a different voltage, which changes the brightness of the filter. It was a very unique sound for the time, other people had not been doing it. Pete was quite advanced as far as how he used the synthesiser, instead of just playing the keyboard and playing notes he was already jumping ahead of what most people did. And then just a year or two later got the big 2500 system, which was a very powerful system, but didn’t abandon the 2600.”

For more information on Pete's work with the ARP systems, please visit our article Electronica - the electronic music of Pete Townshend.

Here is one of the ads featuring Pete that ARP published in 1975. 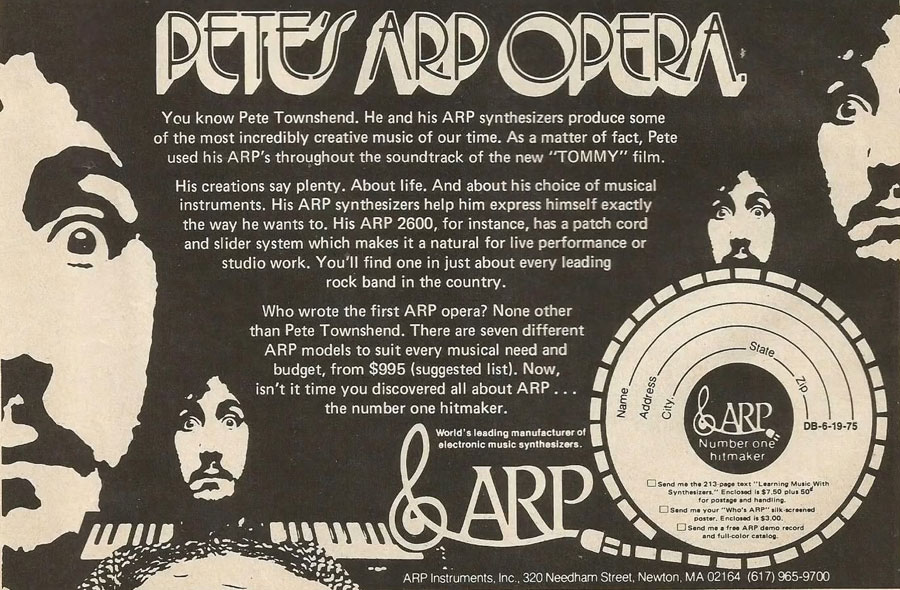