Pete Townshend and Heavy Metal Magazine are teaming up to produce a graphic novel of Lifehouse, which is slated to be published in July 2020. The new project is based on Pete’s original 1971 screenplay about a dystopian world set in the future, that was written for Universal Pictures but was never produced into a film. The story will also draw from the songs Pete wrote for the unreleased Lifehouse rock opera, some of which ended up on the Who's Next album. The 150-page book will be written and illustrated by artist James Harvey, who worked on Little Nemo.

Pete discussed the project in a statement to the press, "A graphic novel based on my very first 1970 concept for The Who’s abandoned ‘Lifehouse’ project is perhaps the most exciting creative development in my long career. ‘Lifehouse’ always had a strong and important visual story that was never even touched on. Even by 1971 when ‘Lifehouse’ was written, it had to be treated as a film script, which was entirely beyond my skill set, and beyond the financial scope of The Who,” he said. “If I had completed my art studies, instead of staying with The Who, I might have made my own graphic novels. I am excited then, with huge anticipation, that at last ‘Lifehouse’ can be realized visually, and as a story –- part science fiction, part spiritual allegory."

Heavy Metal CEO Jeff Krelitz said, “Pete Townsend is a master storyteller in musical arts. His music changed the way the world views rock ‘n’ roll. After a 50-year wait, Heavy Metal is excited to help him realize his vision with this timeless story. Harvey’s storytelling, an infusion of graphic design, mod and Japanese styles, exactly fit what we were looking for."

Comic illustrator James Harvey commented, “Lifehouse is the last great artifact of the counterculture of the mid-20th century. I’m taking my duty as custodian, curator and shepherd of this unique project with the seriousness and the sense of joy it requires. Going over the treasure trove of notes, scripts and unheard music, it’s clear that Pete’s vision was 50 years ahead of its time. A story for our generation and the generations beyond as much as it was a story for his.” 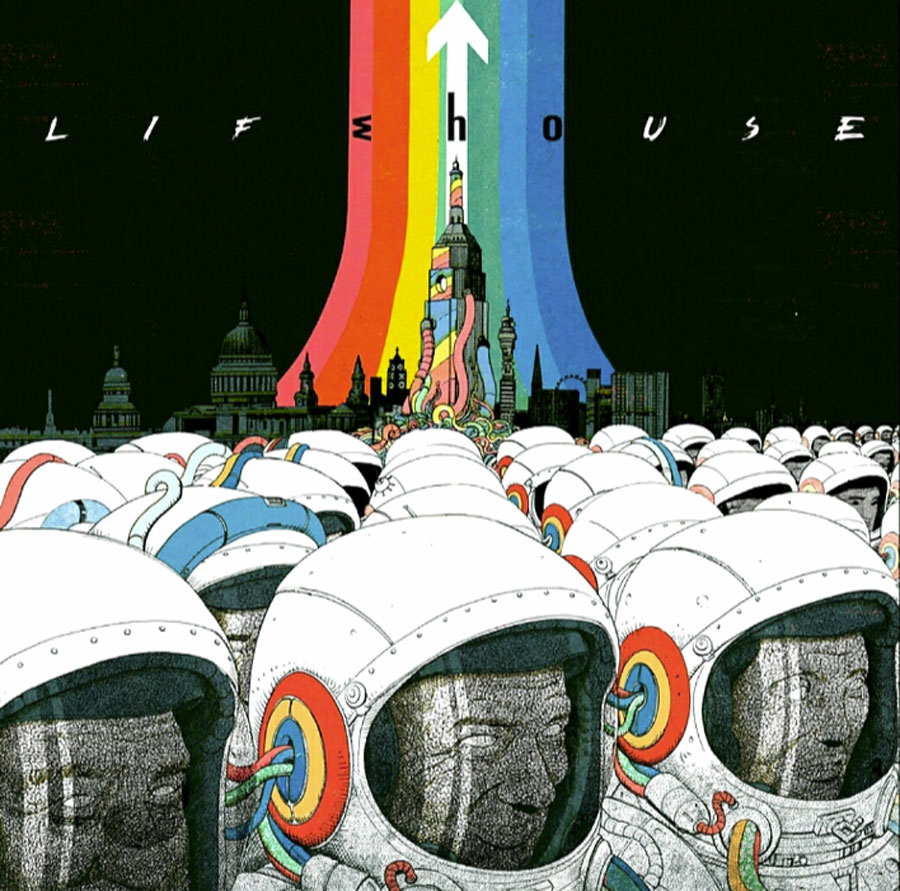 Pete Townshend has revisited his Lifehouse project a few other times over the years. In 1999, a Lifehouse radio play was broadcast on BBC Radio 3, that was adapted for radio by Jeff Young. Pete followed that up in 2000 with a solo concert of Lifehouse songs that he performed with his band at Sadler Wells in London, which was released on DVD. He also released the excellent Lifehouse Chronicles 6-CD boxset in 2000, that he sold from his Eel Pie website. In 2007, Pete launched the groundbreaking Lifehouse Method website with Lawrence Ball, based on concepts from the Lifehouse story. The website was designed to generate music processed from users personal input into the system. The project spun off the Method Music album by Lawrence Ball in 2010, which contained music inspired by the Lifehouse Method system. For more information, please visit the Lifehouse Method page.

Pete discussed Lifehouse in the liner notes for the Method Music.

In 1971 I wrote a film script of Lifehouse for Universal Pictures. It was never realised as a film or any kind of theatrical narrative drama until 1999, when it was developed by my company Eel Pie and broadcast as a radio play by the BBC. Many of the songs intended for the Lifehouse project as originally configured are of course familiar to listeners as staples of rock radio, television, and more: Baba O’Riley, Won’t Get Fooled Again, Behind Blue Eyes, The Song Is Over, and many more were all part of what was to be Lifehouse.

The idea of Lifehouse originally centred on an idea about a self-sufficient drop-out family group farming in a remote part of Scotland who decide to return South to investigate rumours of a subversive concert event that promises to shake and wake up an apathetic fearful British society. Integrated into society is a Virtual Internet Grid through which users are delivered, via government-mandated ‘experience suites,’ everything they need: safety, energy, nourishment, and lavish entertainment programming so highly compressed that the subject can ‘live out’ thousands of virtual lifetimes in a short space of time.

A young composer called Bobby intends to hack into the Grid and offers a festival-like music concert – the Lifehouse – which he hopes will impel the audience to throw off their suits (which are in fact not necessary for physical survival) and attend in person. The family arrives at the concert venue early and takes part in an experiment (represented in what I would come to call the Lifehouse Method) that Bobby conducts in which each participant is both blueprint and inspiration for a unique piece of tailor made music based upon his or her own specific personal data. Bobby hacks into the Grid and plays the music of all the participants of the concert, sharing them and their music with the world, and calling each other together to celebrate.