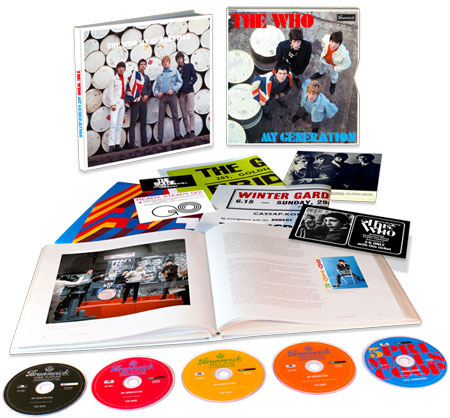 Pete Townshend has released a set of 11 demos that he recorded in his home studio in 1964-65 for The Who’s new “My Generation Super Deluxe” 5-disc box set. Disc 5 is titled CD5: Primal Scoop – The Demos, and contains early versions of many of the songs from The Who’s first album, as well as 3 songs that have never been released before: “The Girls I Could’ve Had”, “As Children We Grew”, “My Own Love”.

Here is the full list of songs for disc 5. For details on “My Generation Super Deluxe” please visit thewho.com.

Pete discussed the recent work he has done with his demos and his plans for future releases of archival material in a couple of interviews for Rolling Stone that were posted on November 16 and December 2.

Here are a few excerpts from those discussions.

“Well, there are quite a few more <demo versions of My Generation> [laughs]. The ratio of songs written to songs on albums is probably about 25, maybe 30 to one. So I've got lots of unreleased stuff.”

“I was already going through the demos. All of my demos have been pillaged at some point because of my Scoop recordings. But what's happened is I've never worked through them and remastered them. This time I decided to do it myself and I started about 18 months ago.

I thought I needed to release them for copyright reasons. It turned out I didn't have to do that. There was a copyright ruling in the U.K. But anyway, I had them ready to go. So when they asked me if I had anything to add to this box, I had these. I wanted to put in something that was novel. I only found a few that fit the 1964 prerogative. Everything for the album was written before something like April of 1965. So I was just looking at that window.”

“I've been talking with Johnny Chandler at Universal, who does the catalogue releases, and we talked about where I was with my demos.”

“So when I look at my box-set career as it was as a solo artist, I've got a very interesting storeroom to delve into. I've got a lot of original handwritten lyrics. I've tended to save everything. I wasn't always good at saving contextual stuff, which would've helped me place things in the exact time, but around 1970 I started to date things. So I have lyrics and I have my demo tapes and I have various different versions of some of those demo tapes. And I was taking photographs for a long time, so I have studio pictures, which have never been published. So there's an interesting range of stuff.”

“For example, I've got lyrics for songs written at some point in my career and you flip them over and there might be a note that I left to my wife or a shopping list, that kind of thing. I've started the work of gathering that stuff together. The other thing is a lot of this would be very interesting to hardline Who fans, but I don't know how much interest it would be to anybody else. So what Johnny Chandler's been looking at is adding value, adding interest to box sets built around each of my solo albums, including the "Scoops." I think they could be made very rich and very interesting and very collectible.”

“I actually did a few podcasts [about the songs], as well, that I may release at some point.”

“It's difficult to know the best way to release this stuff, whether just to put it out and let it go out into the online ether and allow it to ... You know, I'm getting old now, and I just feel like I'm sitting on so much stuff. I must have about 450 demos, but quite a few of those have been bootlegged.”