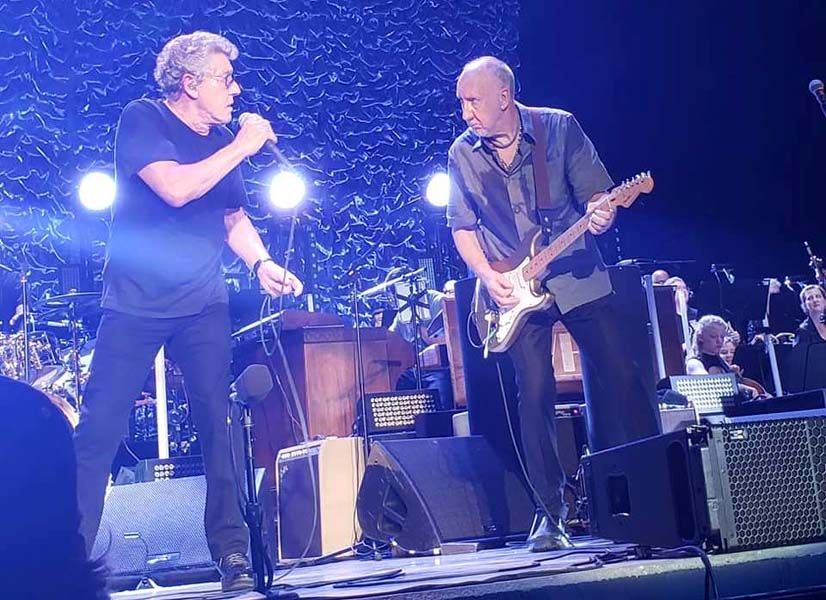 The concert at the Amphitheater at the Hollywood Casino outside of St Louis was upbeat and lots of fun for all, including everyone on stage. Tommy's birthday was a good one.

The big news was Pete's voice, or lack thereof. He could talk a bit although very croaky but his laryngitis really affected him on his 3 songs, Eminence Front, I'm One and Drowned. When he started Eminence Front, he told us he would try to sing it and Roger told the audience to sing it back to Pete. He got through it, with Roger and Simon singing the chorus more loudly than normal, especially Roger, who often will quietly mouth the words. I'm One is a solo, with Simon joining in on the I've Got a Gibson verse, but he mastered on. Drownded was the toughest, especially as Roger no longer does the accompanying harmonica part, but he takes a longer break before Love Reign (offstage also during the Rock) but he got through it. He laughingly told us that he doesn't have a sore throat and that some parts came out better than others. The crowd cheered heartedly for each song. He definitely gets credit for trying.

At one point Roger commented that they were freezing at the last show in the Chicago area and that he forgot what it was like to sweat. Sweat they all did last night, especially Roger and Pete, as did the audience. Climate changes can be difficult on singers so perhaps that contributed to Pete's laryngitis.

As often happens, when one is off, the other picks up the mantle. Roger was much more chatty and charming, more like his solo tours, as Pete conserved his voice. At one point, Roger commented that Pete couldn't talk, to which he growled back that he could talk. Both laughed.

This did not in any way diminish Pete's playing, in fact he probably played with more passion than in Nashville. And he was outstanding in Nashville.

Roger's voice was magnificent all night. His Love Reign was unbelievable, as was Loren's intro. Pete commented on how superb Loren's intro was when he introduced him at the end. Pete also complemented Roger's voice at the very end of the show.

The set list was the same as Nashville except for a swap of The Seeker for You Betta You Bet. Good swap, although I think the audience gets up more on YBYB even though it is not a personal favorite of mine. I do miss hearing Miles.

The audience is responding very enthusiastically to the acoustic version of WGFA. They definitely love playing it, with Roger really banging his feet on the stage and speaker throughout. After it he mumbled something about the stage floor, stomping around a little as he tapped different parts of the floor. Probably has some play in it.

During the band intros between Love Reign and Baba, Pete had regained a little of his voice and told us that Simon has a solo on the new album - in Nashville he had mentioned that Simon wrote a song on it, but it is good to know that he is also performing it. Roger added that Pete has written some fabulous songs for it, laughing that all were not that easy to sing.

The other intros were complimentary, although Pete did seem to forget Zak. As Pete speaks, Roger typically roams around the stage, microphone slung over his shoulder. He wandered back by Jon, who mouthed "Zak", as Pete had moved on to the orchestra. Zak shrugged and laughed towards Roger. Once Pete took a breath, Roger told Pete - Zak, to which he responded that he had forgotten "The Drummer". Zak took a dramatic acknowledgement. Cute moment.

Both Pete and Roger were very complimentary of Keith and the orchestra. Pete spoke about their dedication to their art and all the hours they spend perfecting it. He told us that orchestras don't mind being called "a band" adding laughing that he prefers to be called an orchestra.

Roger commented on the orchestra's long day as they start at 11, rehearse for a couple hours, break, come back for a couple more hours, do sound check with the band (where Roger laughingly says they mess up the sound that they had set) and then do final touches. About a 12 hour day.

Roger was also very complimentary of Katie Jacoby and her added role of librarian in each city. She coordinates the sheet music for each section of the orchestra, getting it in the proper order. She also wowed the St Louis fans by coming out in a Blues sweater to perform her Baba solo to thunderous applause.

This show is really clicking now. Pete commented how much he is enjoying it and how the concept for this tour was inspired by Roger's Tommy tour last summer, giving a plug for the upcoming album out next week that was recorded last June in Bethel Woods, site of Woodstock. As much as I enjoyed that show and tour, this tour has a little for everyone and is a total joy.