Pete Townshend will take part in the Symfunny No. 2 benefit show, an evening of music and comedy to help raise funds for Parkinson’s UK, which will be held at the Royal Albert Hall on Wednesday, 19 April 2017.

Pete will perform select songs, accompanied by the specially created Symfunny Orchestra and Choir, featuring some of the best professional musicians and voices in the UK. Also on the bill are host Jason Manford and stand-up comedian Rob Deering, along with Katie Melua, Collabro, Josh Widdicombe, Jack Dee and the I’m Sorry I Haven’t a Clue team. Further acts from the worlds of comedy and music are to be announced ahead of the event.

This very special fundraising event is the brainchild of conductor, composer and producer, James Morgan who was diagnosed with Young Onset Parkinson’s in 2012.  James, along with his partner, fellow composer, producer and mezzo soprano Juliette Pochin, wanted to use their connections to help raise money for and awareness of this progressive condition, for which there is currently no cure.

Having worked with Pete Townshend on a recent project, James reached out to him to take part in Symfunny No. 2. Pete Townshend said, “I’m pleased to work with my friend and colleague James Morgan in the Symfunny concert. My beloved father-in-law Edwin Astley, who helped me break into orchestral arrangements for some of my songs in the ‘80s, suffered and eventually died from Supranuclear Palsy which is a horrible type of Parkinson’s Disease. Together we collaborated on several songs, one very silly fugue called ‘Football Fugue’ which I will perform on the night. If I’m allowed to speak, I can be funny too.” In addition to 'Football Fugue', Pete will also perform 'Love Reign O'er Me' with the orchestral backing. 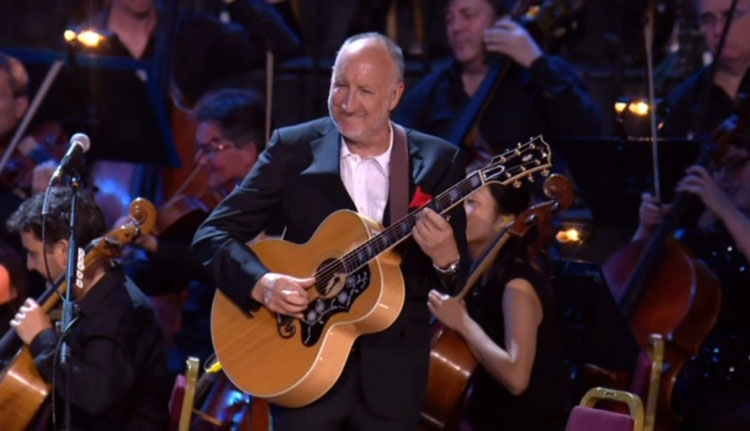 Photo: Pete performing at Classic Quadrophenia show at the Royal Albert Hall in 2015.